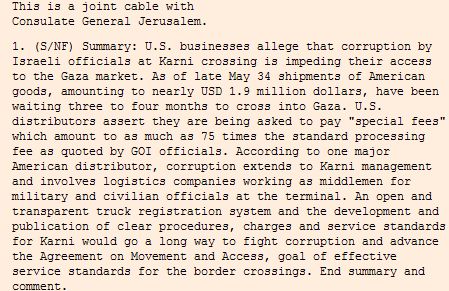 U.S. distributors accused Israel in 2006 of charging exorbitant fees to allow their goods into Gaza and an Israeli general admitted corruption existed at a major border crossing, a U.S. diplomatic cable shows.

The cable, obtained by WikiLeaks and published Thursday by the Norwegian newspaper Aftenposten, said frequent closures of the Karni crossing had “exacerbated the problem of access and appears to have forced up the cost of bribes” paid to Israelis.

The disclosures predate the 2007 armed takeover of the Gaza Strip, home to 1.5 million Palestinians, by Hamas Islamists hostile to the Jewish state. Israel has cited the Hamas threat in justifying a controversial blockade it has kept on Gaza, with Egyptian help.

“As of late May 34 shipments of American goods, amounting to nearly USD 1.9 million dollars, have been waiting three to four months to cross into Gaza,” said the cable, classified “secret” by the U.S. ambassador to Israel at the time, Richard Jones.

“U.S. distributors assert they are being asked to pay ‘special fees’ which amount to as much as 75 times the standard processing fee as quoted by GOI (Israeli government) officials.”

The cable quoted distributors for several U.S. companies complaining that payoffs were required to move their trucks to “a spot near the head of the so-called ‘Israeli line’,” which progressed more quicker to help Israelis supplying Palestinians.

“According to business contacts, allegations of corruption at Karni have a long history,” the cable said.