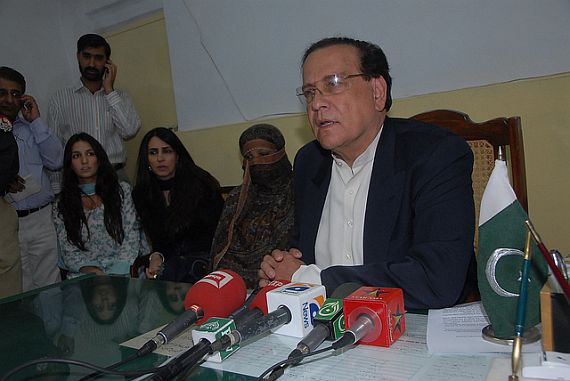 Declan Walsh recounts the story of Aasia Bibi, a Christian Pakistani woman convicted of blasphemy, whose most prominent defender, Salmaan Taseer the governor of Punjab, was assassinated last week.

A row over a glass of water is at the root of the case against the 46-year-old Christian mother of five. And it is indirectly the reason why a rogue policeman killed Taseer outside a trendy Islamabad café last Tuesday, plunging the country into a fresh torment.

The argument started on a hot summer’s day in June 2009 as Aasia Bibi picked falsa berries – a purple fruit used to make squash – with her Muslim neighbours. She brought them water to drink; they refused to touch her glass because she was a Christian. A vicious row ensued, although what was exactly said remains a matter of contention.

Bibi’s accusers say she flung vile insults at Islam and the prophet Muhammad. “She got very annoyed,” recalls Maafia. “But it was normal. We could not drink from that glass. She is Christian, we are Muslim, and there is a vast difference between the two. We are a superior religion.”

Bibi’s supporters say she used no religious slander, and was resisting pressure to convert to Islam. “She said those women used to badger her to convert to Islam. And one day she just got fed up with it,” says Shehrbano Taseer, 21-year-old daughter of the slain governor, who has visited Bibi in jail.

After Bibi’s conviction last November, the case seized the attention of Taseer, the outspoken governor of Punjab. Outraging conservatives, he visited Bibi in jail along with his wife, Aamna, and his daughter. He posed for photos, offered warm support, and promised a presidential pardon. He spoke on high authority – President Asif Ali Zardari told Taseer he was “completely behind him”, a reliable source said.

The bold intercession had been prompted by Taseer’s daughter. During a family holiday at the Punjab government’s winter residence in Murree, a hill resort above Islamabad, Shehrbano had alerted her father to Bibi’s plight through her Twitter feed. “He took the phone, read the tweets, and sat and thought about it for several hours. Then he said we should do something,” she recalls.

He was playing with fire. Religious leaders were outraged at Taseer’s description of the blasphemy statute as a “black law”. Protesters torched the governor’s effigy outside his sweeping residence in central Lahore. A radical cleric in Peshawar’s oldest mosque offered a 500,000 rupee (£3,800) reward to anyone who killed Bibi. Then last Tuesday Taseer’s guard, 26-year-old Mumtaz Qadri, turned his weapon on his boss and pumped him with bullets.

The killing has rocked Pakistan more than any event since the assassination of Benazir Bhutto in 2007. And the unseemly public reaction has laid bare an ugly seam of Pakistani society, suggesting a country in the grip of a rash Islamic fervour.

Last Wednesday 500 clerics from the mainstream Barelvi sect, who had previously criticised the Taliban, forbade their followers from offering condolences to Taseer’s family. Another religious group has planned a rally in Karachi tomorrow to protest against law reform. Posters for the rally singled out Sherry Rehman, a brave ruling party MP who shared Taseer’s outspoken views, for criticism. One preacher in the city has already dubbed her Wajib ul Qatil by one preacher – “deserving of death”. Fears that she could follow Taseer hardly seem overstated.

For all that, there is less religion behind the blasphemy furore than meets the eye. Critics say the law is, often as not, used as a tool of coercion against vulnerable minorities, or to settle petty disputes, or both. Typically, disputes culminate in one man claiming that his enemy burned pages from the Qur’an – even though it is a mystery why anyone would choose to do so in a religion-obsessed country such as Pakistan. Many victims of the blasphemy law, in fact, are Muslim.

When Christians are targeted, the motivation is often an ancient subcontinental prejudice . Christians have traditionally worked as cleaners and sweepers; many Muslims still consider them “unclean”. “This whole business about religion is just a decoy, a smokescreen,” said Ali Dayan Hasan of Human Rights Watch. “It’s often a case of simple caste prejudice.”