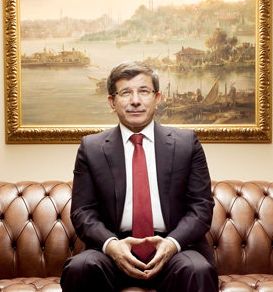 In the fall of 2009, relations between Serbia and Bosnia — never easy since the savage civil war of the 1990s — were slipping toward outright hostility. Western mediation efforts had failed. Ahmet Davutoglu, the foreign minister of Turkey, offered to step in. It was a complicated role for Turkey, not least because Bosnia is, like Turkey, a predominantly Muslim country and Serbia is an Orthodox Christian nation with which Turkey had long been at odds. But Davutoglu had shaped Turkey’s ambitious foreign policy according to a principle he called “zero problems toward neighbors.” Neither Serbia nor Bosnia actually shares a border with Turkey. Davutoglu, however, defined his neighborhood expansively, as the vast space of former Ottoman dominion. “In six months,” Davutoglu told me in one of a series of conversations this past fall, “I visited Belgrade five times, Sarajevo maybe seven times.” He helped negotiate names of acceptable diplomats and the language of a Serbian apology for the atrocities in Srebrenica. Bosnia agreed, finally, to name an ambassador to Serbia. To seal the deal, as Davutoglu tells the tale, he met late one night at the Sarajevo airport with the Bosnian leader Haris Silajdzic. The Bosnian smoked furiously. Davutoglu, a pious Muslim, doesn’t smoke — but he made an exception: “I smoked; he smoked.” Silajdzic accepted the Serbian apology. Crisis averted. Davutoglu calls this diplomatic style “smoking like a Bosnian.”

Davutoglu (pronounced dah-woot-OH-loo) has many stories like this, involving Iraq, Syria, Israel, Lebanon and Kyrgyzstan — and most of them appear to be true. (A State Department official confirmed the outlines of the Balkan narrative.) He is an extraordinary figure: brilliant, indefatigable, self-aggrandizing, always the hero of his own narratives. In the recent batch of State Department cables disclosed by WikiLeaks, one scholar was quoted as anointing the foreign minister “Turkey’s Kissinger,” while in 2004 a secondhand source was quoted as calling him “exceptionally dangerous.” But his abilities, and his worldview, matter because of the country whose diplomacy he drives: an Islamic democracy, a developing nation with a booming economy, a member of NATO with one foot in Europe and the other in Asia. Turkey’s prime minister, Recep Tayyip Erdogan, is a canny, forward-thinking populist who has drastically altered Turkish politics. Erdogan and Davutoglu share a grand vision: a renascent Turkey, expanding to fill a bygone Ottoman imperial space.

In as much as this New York Times Magazine article is filled with interesting anecdotes, it presents a useful portrait of Davutoglu. At the same time, it is peppered with insinuations and overt claims that Davutoglu and the government he represents have over-sized ambitions which implicitly infringe on America’s “right” to impose its power.

This image of the Turks as upstarts is epitomized in a statement from one of Traub’s sources. Noting the opposition Turkey faces in Washington, Traub writes:

The truth is that for all his profound knowledge of the history of civilizations, Davutoglu misread the depth of feeling in the U.S. about both Israel and Iran, or perhaps overestimated Turkey’s importance. This is the danger of postimperial grandiosity. “They talk as if they expect a merger between Turkey and the E.U.,” says Hugh Pope, head of the Turkish office of the International Crisis Group. “They think they’re more important than Israel.”

Turkey — a country with a population close to 80 million; 17th largest economy in the world; located at a strategic hub between three continents that could reasonably be called the center of the world; a bridge between the West and the Islamic world — and they have the audacity to imagine they are more important than a country smaller than New Jersey that throughout its existence has been a center and source of strife?! How dare the Turks!

Traub’s account is at its worst when he deals with the Mavi Marmara massacre — an event he clearly didn’t take the trouble to research with any care. “The flotilla refused Israel’s demands to alter course, and a helicopter-borne commando assault on the Mavi Marmara, the lead ship, turned deadly, with eight Turkish citizens and one American killed.” In fact, it had altered course, was heading west and was in international waters. But such details would obscure the intended narrative that the flotilla was in some sense a Turkish act of provocation and Israel’s response unavoidable.

One of Davutoglu’s greatest diplomatic achievements was the creation of a visa-free zone linking Turkey, Jordan, Lebanon and Syria, thus reconstituting part of the old Ottoman space. The four countries have agreed to move toward free trade, as well as free passage, among themselves. As part of the zero-problems policy, Turkey moved to resolve longstanding tensions with Cyprus and Armenia and, more successfully, with Greece and Syria. Turkey’s decades of suppression of Kurdish demands for autonomy put it at odds with the new government of Iraqi Kurdistan, which sheltered Kurdish resistance fighters. But the Erdo­gan government reached out to Kurdistan, America’s strongest ally in the region. Relations with the Bush administration had been rocky since 2003, when Turkey’s Parliament voted against permitting U.S. forces to enter Iraq through southeastern Turkey. But by now the U.S. was eager to use Turkey as a force for regional stability. The rapprochement with Kurdistan thus smoothed relations with Washington and made Turkey a major player in Iraqi affairs. Turkish firms gained a dominant position not only in Kurdistan but also, increasingly, throughout Iraq. And Iraqi Kurdish leaders had cracked down on the rebels. It was a diplomatic trifecta.

But Davutoglu’s vision extended far beyond securing the neighborhood for Turkish commerce. One of his pet theories is that the United States needs Turkey as a sensitive instrument in remote places. “The United States,” he says, in his declamatory way, “is the only global power in the history of humanity which emerged far away from the mainland of humanity,” which Davutoglu calls Afro-Eurasia. The United States has the advantage of security and the disadvantage of “discontinuity,” in regard to geography as well as history, because America has no deep historic relationship to the Middle East or Asia. In Davutoglu’s terms, the U.S. has no strategic depth; Turkey has much. “A global power like this, a regional power like that have an excellent partnership,” Davutoglu concludes with a flourish.

Davutoglu’s point about the effects of America’s geographic isolation is well made, though it clearly doesn’t impress Traub.

Perhaps it would have been helpful if the reporter had made some attempt to contextualize the Turkish foreign minister’s initiatives by contrasting them with the diplomatic successes of the US in the Middle East over the last decade, or the vision that animates the work of the current US Secretary of State.

4 thoughts on “Turkey’s dynamic role in the Middle East”