7.55 — After 12 hours of near-uninterrupted viewing of Al Jazeera English live television I can only shower this news organization with praise. They should set up an intern program for American news editors to show them how it’s possible to deliver news without being enslaved by commercial interests or showing unwarranted deference to the political establishment. It’s sad that the average American TV viewer has no idea what international news broadcasting of this quality could add to their understanding of the world.

Ali Abunimah notes Israel’s admiration for Egypt’s security services as revealed in the Palestine Papers. In 2007 General Amos Gilad said: “I always believed in the abilities of the Egyptian Intelligence service (GIS). It keeps order and security among 70 millions – 20 millions in one city – this is a great achievement, for which you deserve a medal. It is the best asset for the middle east.”

6.38 — In his statement, Obama ducks the core issue: the demand from Egyptians for Mubarak to go. By prioritizing the need for the restoration of civil order — that security forces and protesters refrain from violence — Obama is treating the uprising as not being fully legitimate. Obama asserts that violence will not result in Egyptian citizens’ being met, yet the evidence is completely the contrary: the fearless and often violent resistance of the people in defying the intimidating strength of the security forces is what is driving change. And note: the administration has provided Mubarak with the key talking point with which he is attempting to retain his hold on power — the promise of “reform.” In their conversation, perhaps Mubarak sought Obama’s advice on what “reform” looks like. Perhaps something like “change.”

6.08 — Al Jazeera: Muslim Brotherhood calls for Mubarak to step down and for the military to intervene.

5.35 — Al Jazeera: Following Mubarak’s speech, protesters chant “Down, Down Mubarak! Down, Down Regime!” 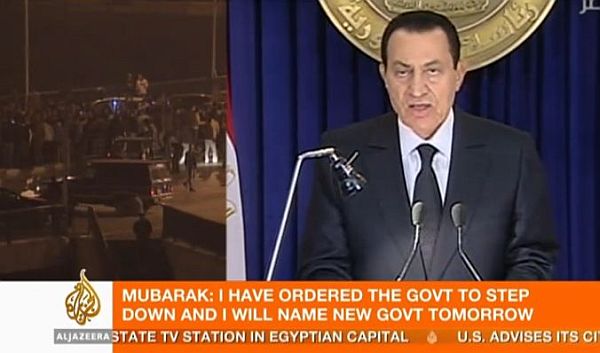 Noting the non-ideological foundation of the Egyptian intifada, Amr Hamzawy says “Egyptians are rediscovering that politics, before anything else, is concerned with citizens’ living conditions within the borders of the relevant nation-state.”

Kuwait’s Emir Sheikh Sabah al-Ahmad al-Sabah figures out how to keep his people happy: 1,000 dinars ($3,580) to each Kuwaiti citizen plus free distribution of essential food items for 14 months.

“Sixty years of Western nations excusing and accommodating the lack of freedom in the Middle East did nothing to make us safe.” George W Bush, November 6, 2003.

Der Spiegel: Why Israel fears Mubarak’s fall — “Democracy is something beautiful,” said Eli Shaked, who was Israel’s ambassador to Cairo from 2003 to 2005, in an interview with SPIEGEL ONLINE. “Nevertheless, it is very much in the interests of Israel, the United States and Europe that Mubarak remains in power.” Democracy in Egypt opens the door to support for Hamas in Gaza.

3.53 — Al Jazeera — Protesters saying the army and the people are one.

3.38 — Wafik Moustafa (Conservative Arab Network) speaking on Al Jazeera says that he believes the army has now assumed control – that Mubarak is effectively no longer president.

Caught off guard by the escalating unrest in Egypt, the Obama administration is desperate to avoid any public appearance of taking sides. But Washington’s close, longstanding political and military ties to President Hosni Mubarak’s regime, plus annual financial support worth about $1.5bn, undermine its claims to neutrality.

While the US favours Egyptian political reform in theory, in practice it props up an authoritarian system for pragmatic reasons of national self-interest. It behaved in much the same way towards Saddam Hussein’s regime in the 1980s, when Iraq was at war with Iran. A similar tacit bargain governs relations with Saudi Arabia. That’s why, for many Egyptians, the US is part of the problem. 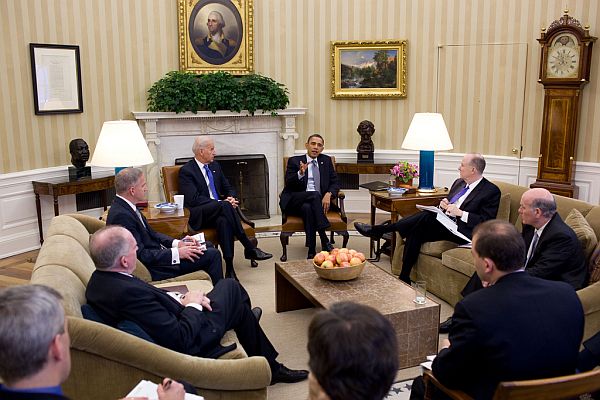 Helena Cobban notes that while Obama monitors the situation in Egypt, he does so surrounded by a group of advisers none of whom know much about the region.

What is notable is the absence of anyone in the group who has any serious knowledge about either Egypt or the broader region.

So thorough-going has been the witch-hunt that AIPAC and its attack dogs have conducted over the past 25 years against anyone with real Middle East expertise that the U.S. government now contains no-one at the higher (or even mid-career) levels of policymaking who has any in-depth understanding of the region or of the aspirations of its people. 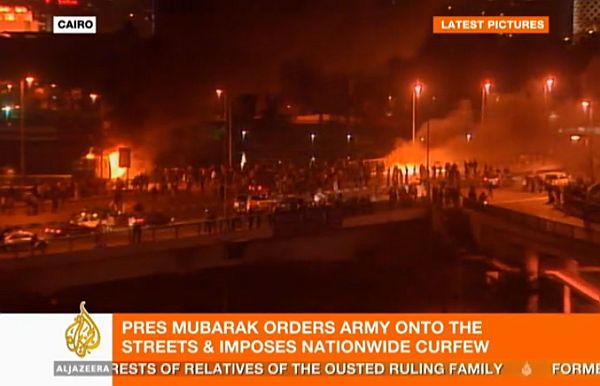 12.46 — Brian Whitaker‘s snap analysis of Clinton’s statement: “It looks to me as if Clinton is angling for a negotiated departure by Mubarak, accompanied by an increase in political freedom. I think the US is aiming to structure the solution in a way that would protect its key interests: the peace treaty with Israel, the Suez canal, and co-operation against terrorism.”

12.20 — Fawaz Gerges on Al Jazeera: the introduction of the army into Alexandria and Suez where the security services completely lost control, is an indication that the power is already shifting out of Mubarak’s hands over to the military. The military will decide Egypt’s future.

12.10 — Secretary Clinton reiterates the administration’s two-fold mantra: it is monitoring the situation and it presses the Egyptian regime to implement necessary reforms. The administration condemns violence on both sides. It refuses to support or utter the word democracy. It has yet to move to the position it took with Tunisia: “we don’t take sides.” In other words, Washington remains on the same side as its “partner”: Hosni Mubarak.

Dictatorial power is by its nature delusional in as much as it invests power in an individual which no individual can possibly possess. After it was announced over an hour ago that President Mubarak would address the nation, the longer the interval before he speaks, the more uncertain his power becomes. Has he been watching Al Jazeera or has he instead been briefed by advisers who played down the level of unrest and who assured him that the army would swiftly restore order? Mubarak’s silence now more say more than whatever he will have to say later. 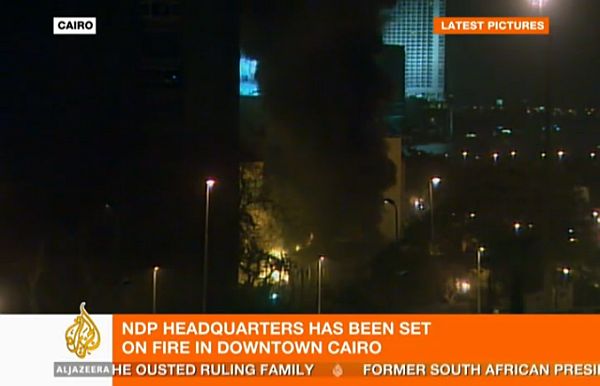 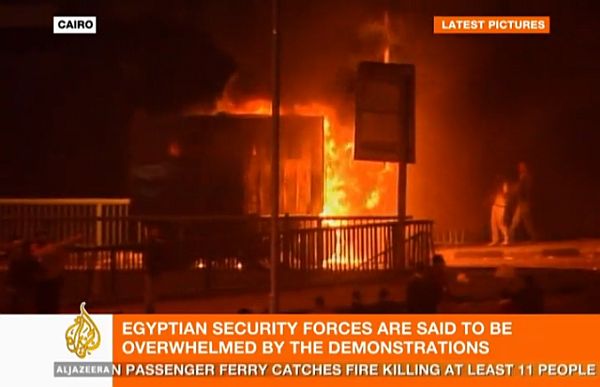 11.00 — As curfew begins, army deployed to take control of streets of Cairo. Smoke rising from the vicinity of the National Democratic Party HQ.

10.32 — Curfew announced to begin at 6pm (local 11am US Eastern). State security has entered the building in which Al Jazeera is based.

10.07 — Al Jazeera: Protesters are celebrating the appearance of the army in Cairo.

Hossam el-Hamalawy, an Egyptian journalist and blogger for the website 3arabawy, underlines the significant role that the Palestinian resistance has played as a source of inspiration for Egyptian protesters. “The outbreak of the al-Aqsa intifada [in 2000] was especially important because in the 1980s-90s, street activism had been effectively shut down by the [Egyptian] government as part of the fight against Islamist insurgents. It only continued to exist inside university campuses or party headquarters. But when the 2000 intifada erupted and Al Jazeera started airing images of it, it inspired our youth to take to the streets, in the same way we’ve been inspired by Tunisia today.”

Meek resistance will be crushed and then ignored. The Egyptians who are now fighting for control of their own country refuse to be ignored and the only way to do that is to demonstrate that the people have more power than the regime.

“In terms of regional affairs, Special Middle East Envoy Senator George Mitchell struck the right chord during his recent visit to Cairo when he told President Mubarak that he was here to ‘listen and hear your advice’.” — US Ambassador Margaret Scobey, February 9, 2009 (WikiLeaks)

“The Egyptian ‘people blame America’ now for their plight. The shift in mood on the ground is ‘mostly because of Mubarak and his close ties’ to the United States.” — US Ambassador Joseph E. LeBaron, February 12, 2010 (WikiLeaks)

“The protests rocking the Arab world this week have one thread uniting them: Al Jazeera” — NYT

8.17 — “Journalists working for The BBC and Al Jazeera have been beaten by the police in Cairo, the networks report. Minutes ago a heavily bandaged journalist for The BBC’s Arabic service in Cairo described being brutally beaten with iron bars by plainclothes officers who seemed to be ‘targeting journalists,’ attempting to report on a protest by about 15,000 people in a square.”

“Why fear of Islamists paralyzes the U.S. on Egypt” — Tony Karon.

“We live in times where the power is coming to back the people” — watching Egypt from Gaza. 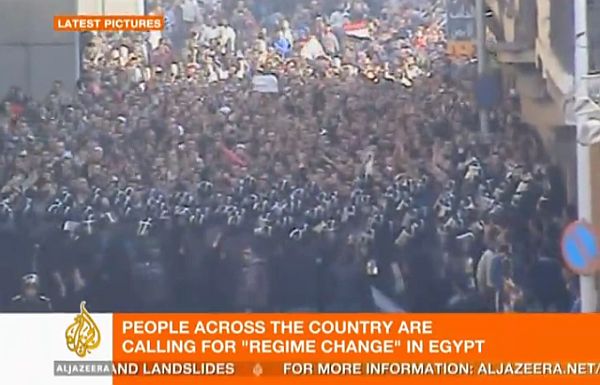 8.02 — “Tahrir sq. is now controlled by the protesters! Riot police is on the roofs shooting bullets and tear-gas grenades!”

7.53 — “Political Analyst Amr Hamzawy to BBC ‘It will not be enough for Mubarak to replace a minister or even the prime minister at this stage'”

7.35 — “Al Arabiya is reporting that some policemen r removing their uniform and joining protesters.”

7.23 — “BBC Arabic: Egyptian authorities have restricted @ElBaradei’s movements & not allowed him to join the protests.”