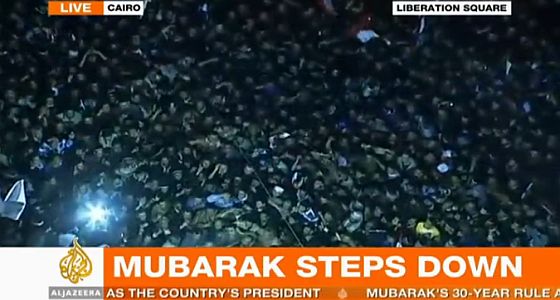 Al Jazeera — Brief profiles of country’s Supreme Council of the Armed Forces as Hosni Mubarak hands over power to the body.

Reaction from Washington – ABC’s Jake Tapper: “cant find anyone in O admin who thinks whatever comes next will be better for U.S. interests than Mubarak was.”

Al Arabiya — nearly 20 million Egyptians are in the street today.

4.05pm — @ashrafkhalil: Everybody calm down about reports that Mubarak has “left Cairo.” He runs country from Sharm El Shiekh more than half the time#egypt #jan25

One cannot but note the “miraculous” nature of the events in Egypt: something has happened that few predicted, violating the experts’ opinions, as if the uprising was not simply the result of social causes but the intervention of a mysterious agency that we can call, in a Platonic way, the eternal idea of freedom, justice and dignity.

The uprising was universal: it was immediately possible for all of us around the world to identify with it, to recognise what it was about, without any need for cultural analysis of the features of Egyptian society. In contrast to Iran’s Khomeini revolution (where leftists had to smuggle their message into the predominantly Islamist frame), here the frame is clearly that of a universal secular call for freedom and justice, so that the Muslim Brotherhood had to adopt the language of secular demands.

The most sublime moment occurred when Muslims and Coptic Christians engaged in common prayer on Cairo’s Tahrir Square, chanting “We are one!” – providing the best answer to the sectarian religious violence. Those neocons who criticise multiculturalism on behalf of the universal values of freedom and democracy are now confronting their moment of truth: you want universal freedom and democracy? This is what people demand in Egypt, so why are the neocons uneasy? Is it because the protesters in Egypt mention freedom and dignity in the same breath as social and economic justice?

Der Spiegel — Mubarak has rejected an offer to put him up in a German luxury clinic to provide him with a dignified exit from power. He doesn’t need medical treatment, his vice president said.

3.50pm — @arabist: America is really a push-over. Govts. in TelAviv and Cairo take its money and then tell it to fuck off. Americans deserve better FP leaders.

“He was looking for only one thing – give me an honorable way out. Let me leave in an honorable fashion,” Ben-Eliezer told Israel’s Army Radio.

Control of Egypt’s economy appeared to be slipping out of the government’s hands, as strikes multiplied across the country and leading business figures sought to disassociate themselves with the Mubarak regime.

Thousands of workers in key industries walked out from their jobs, piling pressure on a political leadership already rocked by the 17th straight day of street protests calling for the president to stand down.

In a further blow to leading NDP members, who in recent years have styled themselves as pro-business reformers, several large companies took out adverts in local newspapers putting distance between themselves and the regime.

Israelis deeply confused about the nature of political stability — still cling to the idea that Mubarak is a stabilizing force:

“Israel breathed a sigh of relief,” Israeli commentator Alex Fishman wrote in Friday’s daily Yedioth Ahronoth after Mubarak’s speech. Fishman noted that now it was unlikely there would be any shifts in Egypt’s foreign policy until at least September. “We’ve received an extension. Which will make it possible for the State of Israel to study the developments closely and to try to prepare for them,” Fishman wrote.

By the standards of any modern politician, it was truly dreadful: in turns vain, arrogant, patronising, condescending and defiant. Above all, it showed Mubarak totally out of touch with the mood of the country and the will of the people that he governs. The only thing to be said in its favour is that it illustrated, in just a few hundred words, all the reasons why he ought to go (even if he’s still refusing to do so).

He began by addressing the people as his “sons and daughters” – a phrase that might slip past unnoticed, though in fact it encapsulates the fundamental problem with Arab leaders and how they perceive themselves and their citizens. They behave like the traditional head of an Arab household, the paterfamilias – a remote, supposedly wise and almost God-like figure who rarely speaks but, when he does, must always be obeyed because he knows what’s best for his children.

3.45pm — @alaa: I’m not religious, and I want a secular egypt, but those secularists who think religion has no role in political life know nothing #Jan25

Most Egyptians cannot make heads or tails of the strangest evening since the crisis began on January 25th. But the night’s events confirm a few things. Mr Mubarak appears to be delegating more power, both formally and de facto, to Mr Suleiman. Even some senior officials now say he is a mere figurehead. The army continues to send mixed messages, perhaps reflecting an internal split, and the political elite that fronts for the military appears ever more out of the loop.

But most of all, the young men and women who form the bulk of the protest movement and have had some success in recent days in spreading dissent to ministries, factories and public services—postal workers, telecommunication workers, bus drivers and hospital staff have staged partial strikes—are becoming increasingly convinced that their country’s leadership is deaf to their pleas.

Earlier yesterday, I spoke to Wael Ghonim and he told me to expect some very good news around 5 pm that night, but he never elaborated what it is. Around 10 am, we heard that Saudi Arabia, alongside UAE and Kuwait, are creating an aid package to Egypt to possibly replace that of the US. Around 4 pm last night, we recieved the news that the President itends to step down tonight and give all of his responsbilities to the VP, Omar Suleiman. The Army then convened and issued its first statement, in a meeting without Mubarak or his VP around 5 pm. Around 9 pm Egypt time, Obama did a speech congratulating the people of Egypt for their march for democracy, so it seemed like a done deal. Finally, an hour later than originally announced, President Hosny Mubarak , against all expectations and information, refused to step down from his post, and said that he refuses any foreign interference in Egypt. The White House then announced that it has been double-crossed by the Egyptian regime.

Now, what does this all mean?

1) Mubarak is not going to leave Office without bloodshed. Any attempt for a peaceful exit has been discarded by his regime, and they are intending to fight the will of the people until the end.

2) Mubarak has burned the image of Hossam Badrawy and the Wisemen council with his speech. Hossam Badrawy, the secretary general of the NDP, was the face of the NDP that announced Mubarak’s intenetion to abdicate power later tonight. Now the man has no credibility. Same goes for the Wiseman Council, since Mubarak’s speech was focused on how he has met their demands, which don’t include him leaving. If most of them don’t quit their posts today, I would be greatly surprised.

3) We are seeing the first possible split in the power structure in Egypt: It seems that the Armed forces are in one camp, and the president, intelligence agencies and the republican guard in another camp. If you add to the equation the Ministery of Interior and the protesters, you have 4 players right now in an intensely unpredictable power struggle. We are now awaiting the second statement from the High council of amred forces to clearify their position once and for all. Whether the Army is with or against the people will determine a lot of today’s outcome.

4) Mubarak has now put the US in a corner: He double-crossed the White House, and announced his intentions to fight foriegn intervention. Adding to that the news of the arab aid, he is sending the US a clear message: “I could tell you and your aid to go to hell, and get the money from the arabs instead. Where does this leave your precious Israel? If you don’t want us to cause problems on that front, you better shut up about what we will do and get with the program, or else!”

If you take all of those factors into consideration, the situation starts looking intensely ominous. If the regime and the army has split, we could see major fighting and bloodshed today. If the Army is with the President, then they will all turn their guns on the Protesters, who are determined not to live under Mubarak rule for one extra day. It also means that he put on the line the future of the transitional government with Omar Suleiman in charge, because Suleiman’s fate seems intensely intertwined with the President now. This has become a fight for survival: it’s either the regime or the people. The bad news is, the regime has all the weapon and organization. The good news is, the people are determined and increasing in numbers and the army might step in and save us all unnecessary bloodshed.

It all depends on the army’s statement now.

The wait is killing me.