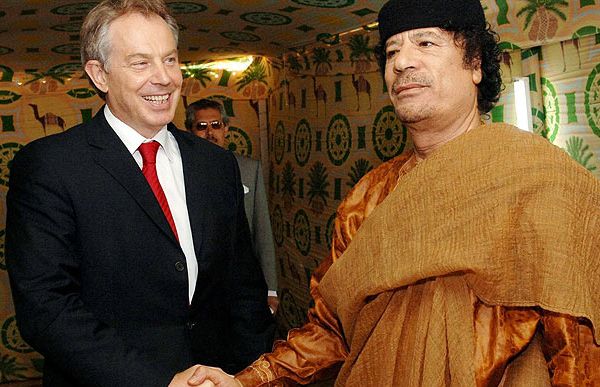 When Moammar Gadhafi told the world he was a changed man, some leaders were skeptical. Others, like Britain’s Tony Blair, were quicker to see the benefits of rapprochement with the oil-rich nation.

Now, as Gadhafi’s regime crumbles, questions are being raised about whether Britain, the United States, and others were too quick to embrace a volatile despot linked to terrorism and oppression as they sought lucrative business deals.

Those deals worth billions are now in jeopardy as Libya hurtles toward civil war. The strategic decision to build ties with the likes of Gadhafi, Egypt’s Hosni Mubarak, and Tunisia’s Ben Ali also threatens to further inflame anti-Western anger in the Arab world.

The former British prime minister flew to Libya in 2004, holding talks with Gadhafi inside a Bedouin tent. He praised the leader for ending Libya’s nuclear and chemical weapons program and stressed the need for new security alliances in the wake of the Sept. 11 terror attacks. British commercial deals soon followed.

Britain sold Libya about 40 million pounds ($55 million) worth of military and paramilitary equipment in the year ending Sept. 30, 2010, according to Foreign Office statistics. Among the items: sniper rifles, bulletproof vehicles, crowd control ammunition, and tear gas.

Although Britain’s current government led by David Cameron has revoked dozens of export licenses to Libya in the wake of the Libyan violence, many say the very weapons and equipment Britain has sold to Libya are being used against the country’s people.

Britain’s elite Special Air Service, or SAS, also participated in recent training for Libyan soldiers in counterterrorism and surveillance. Robin Horsfall, a former SAS soldier, said at the time that the training was a mistake: “People will die as a result of this decision,” he warned.

In September 2009, the Daily Telegraph reported:

Members of Britain’s elite regiment are angry at having to help train soldiers from a country that for years armed terrorists they fought against.

An SAS source said: “A small SAS training team have been doing it for the last six months as part of this cosy deal with the Libyans.

“From our perspective we cannot see it as part of anything else other than the Megrahi deal.” Another SAS soldier said: “The IRA was our greatest adversary now we are training their backers. There was a weary rolling of the eyes when we were told about this.”

The Ministry of Defence refuses to comment on special forces activities, but sources have admitted that SAS reserves have bolstered the team that has been training “Libyan infantry in basic skills”.

A senior defence source admitted: “This is a huge political embarrassment.’’

The first moves towards setting up the training agreement are believed to have begun after Tony Blair visited
Libya as Prime Minister in 2004. However, the deal was only finalised and “signed off” by Mr Brown earlier this year.

Robin Horsfall, a former SAS soldier who took part in the Iranian Embassy siege in 1980 and fought the IRA in Northern Ireland, said:

“There is a long list of British soldiers who have died because of Gaddafi funding terrorists.

“The SAS is being ordered to do something it knows is morally wrong.”