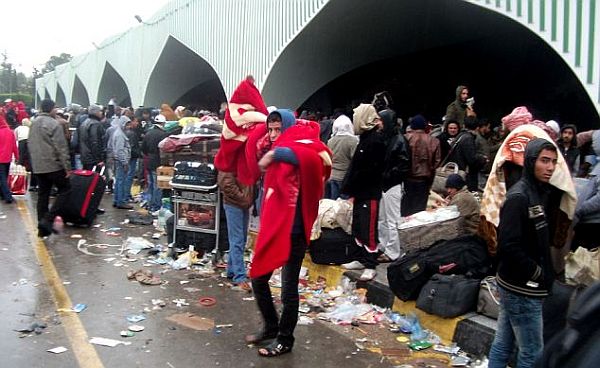 Ben Plesser spoke to the CBS’s Early Show about the situation at Tripoli’s airport:

“There are thousands, maybe tens of thousands, of people packed into the terminal, mostly foreign workers. They’re Egyptians, they’re Turks, they’re from Southeast Asia. Every once in a while you see a western face.

“They are living on the floor, wrapped in dirty blankets, they’ve been there for days. And they’re the lucky ones, because they have a roof over their heads,” he said.

Plesser said airport workers were wearing face masks due to concerns about infectious diseases, because no one has had access to facilities or showers, and are living off of whatever scraps or trash they can find. “And these people are basically the lucky ones,” Plesser said.

Plesser notes the few “Western” faces in the airport — which, to be blunt, means white people. What else are we to suppose defines a Western face in a crowd of brown faces other than a pale complexion?

There are about 6,000 Americans in Libya, but most hold dual Libyan citizenship, so, according to State Department spokesman PJ Crowley, it’s up to the Gaddafi government whether they will be allowed to leave. Had any managed to reach the airport, Plesser’s snap survey would have overlooked those invisible Westerners.

The scramble by foreigners to leave the country began several days ago, but the number of commercial flights could not keep up with demand. Many countries have been mobilizing military and chartered ships and planes.

After landing in Malta on a flight chartered by the British government, Sam Dewhirst from Leeds who had been teaching English in Libya, described the situation in the Tripoli airport as “hellish.”

While he and other Britons had been able to “jump the queue,” he said, scores of North Africans were still waiting to leave or had abandoned their suitcases on the tarmac in a mad scramble to get on flights. “It was heartbreaking,” he said.

No explanation on how these Britons were able to jump the queue.

And then there’s the inexplicable, inexcusable case of a Canadian flight that landed in Tripoli, found no Canadian’s waiting to get out and so returned to Jordan without a single passenger!

“There were no other citizens from like-minded countries who needed the flight,” said a Canadian government official.

The airport is full of like-minded people — everyone wants to get the hell out of Libya and probably wouldn’t be too choosy about their destination. What is this club of like-minded countries to which Canada belongs? The white club?

4 thoughts on “Rescuing the white people from Tripoli”