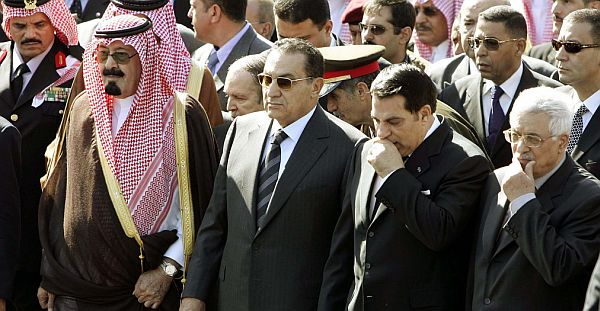 In the age of Arab revolutions, will Saudis dare to honor Facebook calls for anti-government demonstrations on March 11? Will they protest at one of Jeddah’s main roundabouts? Or will they start in Qatif, the eastern region where a substantial Shiite majority has had more experience in real protest? Will Riyadh remain cocooned in its cloak of pomp and power, hidden from public gaze in its mighty sand castles?

Saudi Arabia is ripe for change. Despite its image as a fabulously wealthy realm with a quiescent, apolitical population, it has similar economic, demographic, social, and political conditions as those prevailing in its neighboring Arab countries. There is no reason to believe Saudis are immune to the protest fever sweeping the region.

Saudi Arabia is indeed wealthy, but most of its young population cannot find jobs in either the public or private sector. The expansion of its $430 billion economy has benefited a substantial section of the entrepreneurial elite — particularly those well connected with the ruling family — but has failed to produce jobs for thousands of college graduates every year. This same elite has resisted employing expensive Saudis and contributed to the rise in local unemployment by hiring foreign labor. Rising oil prices since 2003 and the expansion of state investment in education, infrastructure, and welfare, meanwhile, have produced an explosive economy of desires.

Like their neighbors, Saudis want jobs, houses, and education, but they also desire something else. Since the overthrow of Saddam Hussein’s regime in Iraq in 2003, they have expressed their political demands in their own way, through petitions that circulated and were signed by hundreds of activists and professionals, men and women, Sunnis, Shiites, and Ismailis. Reformers petitioned King Abdullah to establish an elected consultative assembly to replace the 120-member appointed Consultative Council Saudis inherited from King Fahd. Political organizers were jailed and some banned from travel to this day. The “Riyadh spring” that many reformers anticipated upon King Abdullah’s accession in 2005 was put on hold while torrential rain swept away decaying infrastructure and people in major cities. Rising unemployment pushed the youth toward antisocial behavior, marriages collapsed, the number of bachelors soared, and the number of people under the poverty line increased in one of the wealthiest states of the Arab world. Today, nearly 40 percent of Saudis ages 20 to 24 are unemployed.

Meanwhile, scandal after scandal exposed the level of corruption and nepotism in state institutions. Princes promised to establish investigative committees, yet culprits were left unpunished. Criticism of the king and top ruling princes remained taboo, and few crossed the red line surrounding the substantial sacrosanct clique that monopolizes government posts from defense to sports. The number of political prisoners and prisoners of conscience swelled Saudi prisons. Under the pretext of the war on terror, the Saudi regime enjoyed a free hand. The interior minister, Prince Nayef, and his son and deputy, Prince Mohammed, rounded up peaceful activists, bloggers, lawyers, and academics and jailed them for extended periods. Saudis watched in silence while the outside world either remained oblivious to abuses of human rights or turned a blind eye in the interests of oil, arms, and investment.