Muammar Gaddafi has several times claimed that he’s up against a rebellion in which his opponents are high on hallucinogenic drugs. I guess he never saw this or this. Tom Friedman, on the other hand, presents what can only be described as a hallucinogenic view of the revolution in Egypt — a psychedelic vision of young Egyptians inspired by Obama, Israeli democracy, Google Earth, the Beijing Olympics, and Palestinian so-called Prime Minister Salam Fayyad. The New York Times columnist is clearly high on something. Fortunately, Sarah Carr was able to catch up with him before the drug wore off and persuaded Friedman to reveal more. 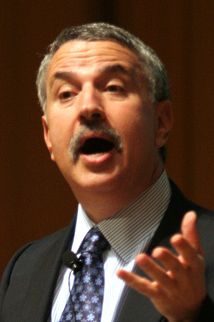 Future historians will long puzzle over how I was given an international platform to freely pontificate on the Arab people and be remunerated handsomely for it. It is true that I am not the only person in the world who formulates dubious theories based on scant or no evidence which I then harangue people with. Other people do it. They are called taxi drivers. But they are not as rich as me and haven’t been awarded three Pulitizer Prizes.

Since I’ve been here in Egypt I’ve been putting together a list of “the-absolutely-irrelevant forces” that have captured the captive Arab mind and ignited the simmering coals of the instant garden BBQ that is the Middle East. You might ask why, since I am in Egypt, I don’t ask an Egyptian – possibly two Egyptians – about what inspired them to completely ignore my theories on the Arab peoples and take to the streets. The answer is this: I am Thomas Friedman and I write a column in the New York Times.

I started my last extremely important column with an introduction in which I listed tyranny, rising food prices, youth unemployment and social media as the “big causes”. Rather than just stop there, I did a Google “surprise me” search and chose five of the random results for my special “mix of forces” which inspired the Arab mass revolts. These included Barack Obama, Google Earth and the Beijing Olympics.

But there are other critical factors integral to an understanding of my bollocks theory on the Middle East. Here they are:

MY MOUSTACHE – Americans have never really appreciated what a radical thing I did in growing a moustache, long the symbol of Arab male virility. I’m convinced that when Arab men catch a glimpse of my moustache as they bring me my breakfast in my hotel they are inspired and say to themselves: “Hmmm. Let’s see. He’s middle-aged. I’m middle-aged. He’s slightly tanned. I’m roughly the same colour. His name is Thomas. My name is Hussein. He is a prick. I sometimes act like a prick. He is not president of the United States. I am not president of the United States. Lincoln is the capital of Nebraska. Water boils at 100 degrees centigrade. He has a moustache. I have a moustache. Both our moustaches have no voice in my future”. I’d put that in my special mix of hallucinogenic drugs and ingest it. [Continue reading…]