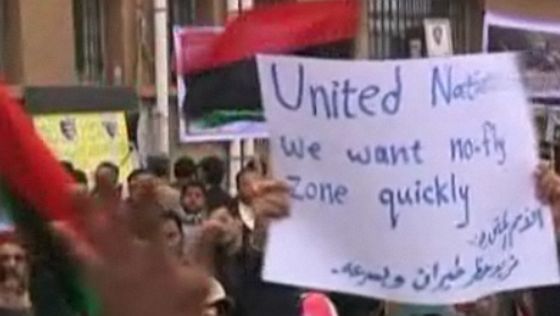 While the Libyan revolt is playing out in vastly different ways, and with far greater bloodshed, it is part and parcel of the democratic revolutionary process rising across the Arab world and beyond. And just as in Egypt, Tunisia, Yemen, Bahrain, and elsewhere, there is no evidence that the Libyan population supports foreign military involvement.

To the contrary, although at least part of the anti-Qaddafi leadership is indeed calling for some kind of military intervention, there appears to be widespread public opposition to such a call. Certainly there is fear that such foreign involvement will give credibility to Qaddafi’s currently false claims that foreigners are responsible for the uprising. But beyond that, there is a powerful appeal in the recognition that the democracy movements sweeping the Middle East and North Africa are indigenous, authentic, independent mobilizations against decades-long U.S.- and Western-backed dictatorship and oppression.

At a demonstration after a funeral for rebel fighters in Benghazi (shown in the video below) protesters can be seen holding up signs saying “Libyans Need No-Fly Zone” and “United Nations: we want no-fly zone quickly.”

Perhaps the signs were being held aloft by foreign agents, or maybe these particular Libyans have not been paying enough attention to Washington’s think tanks and don’t know how difficult a no-fly zone is to operate or what wider military involvement it might entail.
Or, maybe those outside Libya who refuse to make any distinction between a no-fly zone implemented in response to Libyan appeals and a no-fly zone imposed without consultation, simply don’t want to hear what Libyans are saying when it conflicts with the views to which so many non-interventionists seem so deeply attached.

Mustafa Abdul-Jalil, head of the Interim Transitional National Council based in Benghazi, in an interview with CNN reiterated his appeal for the international community to immediately impose a no-fly zone.

There seems to be a highly questionable logic at work here among the opponents of a no-fly zone: if Gaddafi can effectively crush his opponents, then the uprising can’t have had enough popular support, but if there’s sufficient popular support, then no outside support is necessary.

In other words, the message to the revolution is this: if you’re going to win, you won’t need our help, but if you need our help, you probably won’t win. Good luck guys.

Does this have implications for the Palestinians?

Isn’t the Boycott, Divestment and Sanctions movement a form of foreign intervention?

If the Palestinians in the West Bank can’t muster the will or the force to kick out the Israeli occupiers, then maybe outsiders should not be making any effort to tip the balance of power.

Good revolutions, as the White House cynically says, grow organically. And believe me, contrary to all the anti-imperialist fear-mongering that’s going around right now, moderately tough-talk notwithstanding, Obama’s actually firmly on the side of the non-interventionists. The international community and especially the US and even more so the Pentagon, are loathe to get involved in this conflict.

So who do you want to align yourself with? US Defense Secretary No-No-Fly Zone Gates or Pro-No-Fly-Zone Mustafa Abdul-Jalil?

To those who argue that US involvement would undermine the credibility of the revolution, consider this observation by Salem Abdel Wahad, a 30-year-old Libyan rebel soldier:

We find one thing strange: the position of the United states. It’s impossible that the U.S. would not have imposed a no-fly zone, impossible, unless they have some agreement with Gaddafi against the Libyan people.

There is no neutrality in this war. If you don’t support the revolution, you are by default against it.

The debate for and against a no-fly zone is not closed, but it should at least be met on honest terms — without concealing the fact that Libyan appeals for a no-fly zone are only growing louder, and without claiming that a no-fly zone would inevitably lead to a full-blown Western intervention. Can a no-fly zone help or are there more effective alternatives?

Aviation Week spoke to two retired US Air Force generals who say that the difficulties in imposing a no-fly zone have been over-stated by the Pentagon.

Any attack, the two generals contend, would be far more limited in scope and greater in effect than critics have suggested.

“[Defense Secretary Robert] Gates has said that a no-fly zone can’t stop helicopters,” the first Gen. says “That’s wrong. There are only three places in Libya where helicopters can stage, fuel, rearm and re-equip – one in Tripoli, one in Benghazi and one in the eastern oil fields that are in the hands of the rebels. They are all near the coast. All the rest of Libya is barren.

“The U.S. Air Force has specialized in operations to take down integrated air defense, crater runways and destroy helicopter staging areas,” he says. “We know where they are. You can shoot down low-flying helicopter with Aim-9X Sidewinders. The suppression would take 24-48 hours with assets that aren’t being used for Iraq or Afghanistan.

PETER GALBRAITH: Generally what happens is that once you’ve declared the no-fly zone, that the target air force is unwilling to fly its aircraft, of the pilots themselves individually are unwilling to fly and so by and large you don’t then need to have patrols to enforce it.

In the case of the no-fly zone that was over Iraq during the time that Saddam Hussein was in power, the Iraqis never actually challenged it, and so it was able to be enforced by a couple of planes patrolling every day.

MARK COLVIN: Do you first though have to take out their radar and other navigational aids?

PETER GALBRAITH: Not necessarily. Again if you declare it, there’s a good chance that the country will choose not to challenge it, or again that the pilots will stop to fly. But it’s also important to remember that in the case of Libya a significant purpose here is psychological. You have a country where a large segment of the population, including of the armed forces, has gone over to the rebellion.

The others may be sympathetic to the rebellion, or certainly are not necessarily committed to Gaddafi who are looking to say, to see how this is going to turn out. And once it’s clear, that Gaddafi is not going to remain in power, they are not going to defend him.

And so one of the purposes of declaring a no-fly zone is to send a signal that the international community is determined that he will not be able to put down the rebellion and this will perhaps hasten his departure or will make people, make it clear that he is not in fact going to succeed in putting down the rebellion.