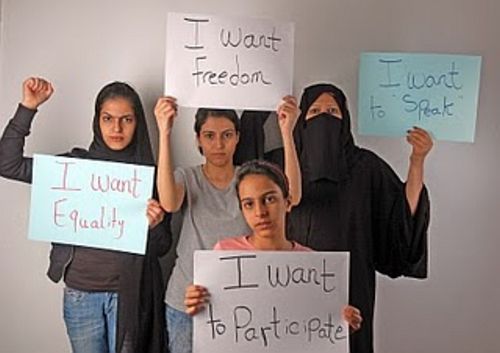 [The following statement in English and Arabic (below) was written by Mona Kareem on Friday March 18th, 2011, and can be found on her personal blog.]

After the recent importance of Social Media in creating change in our societies, a lot of Saudi women have been active on Twitter through the hash tag #SaudiWomenRevoltion to write their demands of applying social equality in Saudi society, giving examples and telling stories on the injustice they are facing in their society.

Media has talked about this hash tag but did not care to push this cause forward. Saudi Women, however, have created a page for their revolution on Facebook and talked to several media means to support their legal and legitimate human rights to fight sexism in their society. Thus, this following statement comes as a document that gathers different demands from the Saudi Women Revolution:

Women cannot have their rights until the system of Male Guardianship is completely taken off the laws and rules of the Saudi state. The Male Guardian or “Mahram” is the father, brother, husband, or even son who has all the legal rights to control a Saudi woman’s life in different ways. The Kingdom of Saudi Arabia has promised the Human Rights Council of the United Nations in June 2009 to cancel Male Guardianship and to end Sexism in the country, but these promises remain unaccomplished. Saudi women mostly suffer from the Male Guardianship because of the following reasons:

– The Saudi Woman cannot work or apply to a job without the permission of her legal male guardian.

– The Saudi Woman does not have the right to travel without her “Mahram” or without his written permission. The Ministry of interior affairs has decided to permit women who are over 45 years in age to travel without a male guardian or his permission; however, airport officials did not apply the decision, as the Human Rights watch stated in its report in April 2008.

– The Saudi Woman cannot receive education without the permission of her male guardian and cannot travel to receive education abroad without his permission even if she was awarded a scholarship from the state. The Saudi woman also suffers from the limited academic majors although she has proved a better educational performance than the Saudi man as the official statistics show.

– The Saudi woman does not have the rights of marriage and divorce without the permission from her male guardian. Saudi Arabia has had different examples of how women suffered from this system in particular. Human Rights Watch 2010 report stated two incidents of men marrying off their sisters five times to get money, in Braida and Riyadh.

– The Saudi Woman does not have the right to follow and finish her official documents and papers without the permission of her male guardian including her cases in court. Human Rights Watch 2010 report mentioned a woman named Sawsan Salim in Qasim who was punished with 300 lashes and one year and a half in jail for showing up to court without a “Mahram”. Justice ministry itself has promised in February 2010 to permit women to work as lawyers, but the promise is still not fulfilled.

– The Saudi woman cannot have medical surgery without the permission of her male guardian. Women have talked a lot about the damages done because of this system. Human Rights Watch report stated in July 2009 that Saudi women need a “Mahram” to enter and leave the hospital. If no “Mahram” showed up to get her out of the hospital, she will stay in until someone does so.

– The Saudi Woman cannot make a bank account for her kids, enroll them in schools, ask for their school files, or travel with them without the permission of her male guardian. [Continue reading…]