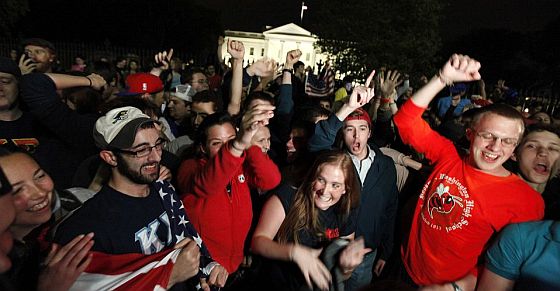 America is at war with “bad guys” and on Monday morning “we got him” — the baddest guy of all.

To the non-American ear there is something at turns amusing then disturbing about the fact that full-grown adults, including literate and less literate presidents, can, without any sense of irony, use this kind of comic-book language. Yet beneath these simplistic expressions is a sense of innocence that Americans cling to, born from the notion that this is a nation that can do no wrong; that at worst America can be misguided but its errors will ultimately never obscure its intrinsic virtue.

What 9/11 and its aftermath did was to widen the gap between the way America sees itself and the way it is seen by the world. If some of us might have hoped that this nation had grown up a bit over the last decade, there has been little evidence of that over the last few days.

On Thursday, President Obama was presented with an opportunity that had slipped through the fingers of his two predecessors: to “take out” Osama bin Laden.

At a moment when hesitation might have been seen as risking political suicide (Obama could have been destroyed by knowledge that he dithered and let America’s nemesis take flight), the president did just that: he put off making a decision.

Why? We’ll probably never know, but the fact was, the timing was awkward. A strike in Pakistan in the early hours of Friday would have happened at the same time that the global media’s attention was focused on London. A royal wedding and two billion viewers’ eyes represented an advertising cash-cow that few news producers would be willing to drag themselves away from.

The wedding played out and payed off just as everyone had hoped and within hours was to be followed by a drama hot enough to be turned into a Hollywood blockbuster.

US special forces swept into Pakistan and during an intense firefight ended the life and career of the most wanted terrorist on the planet. Faced by the overwhelming power of US Navy Seals, bin Laden acted just the way we’d been led to expect an evil low-life would: he used his wife as a human shield and tried to save his own skin. But justice was served — at least justice as a form of storytelling.

Only after bin Laden’s bloody body had been dumped in the Indian ocean did a more accurate and less glorious narrative emerge. This is the story that Hollywood will have a hard time telling.

The firefight was over before soldiers had even entered bin Laden’s house — a house on the edge of town, not a luxury mansion on an imposing hilltop.

Administration officials said that the only shots fired by those in the compound came at the beginning of the operation, when Bin Laden’s trusted courier, Abu Ahmed al-Kuwaiti, opened fire from behind the door of the guesthouse adjacent to the house where Bin Laden was hiding.

After the Seal members shot and killed Mr. Kuwaiti and a woman in the guesthouse, the Americans were never fired upon again.

They simply located, shot and killed the remaining men in the house. The surviving women and nine children had their hands bound and were then left in the company of the dead — with the exception of bin Laden and his son whose bodies were removed.

Bin Laden’s 12-year-old daughter Safia is said to have witnessed her father’s death. Will Americans ever hear her story? Are the expressions on her face or those of any of the other children still etched in the memories of the soldiers who killed their parents? If so, will those memories ever be recounted or must they be consigned to a national security vault of silence?

The story of 9/11 that America has been telling itself for ten years is what drove young people to the streets to celebrate bin Laden’s death in the early hours of Monday morning, but it’s not a story that resonates much beyond these shores. It is and never was an axis around which the world was meant to revolve.

In a letter to one of Pakistan’s leading newspapers, Moez Mobeen from Islamabad, explains why the 9/11 narrative has such little meaning in a region which for most Americans is defined by the 2001 attacks.

It has long been argued by western thinkers and strategists especially the policymakers that the West is not at war with the Muslim world; that it does not believe in the clash of civilisations and that the Muslim World generally does not have any reservations about the foreign policies pursued by the western nations. This was the point which Obama emphasised in his speech announcing the death of Osama bin Laden. Whatever the American narrative be, it is certain that the Muslim world does not believe in it. It is all but obvious that Osama bin Laden’s Al-Qaeda, Mullah Omer’s Taliban, Tahir Yuldashev’s Islamic Movement of Uzbekistan, Ahmad Yasin’s Hamas, Abu Sayyaf’s Harkat ul Islamiyah, to name a few, are reactionary movements formed to protest and fight against foreign policies pursued by the West with regard to the Muslim world. Obama may try to present these movements as the common enemies of humanity but the fact remains that for the Muslim world these movements are resistance movements fighting the imperial forces and their allies. If indeed it is the slaughter of Muslims which worries Obama then how does he justify the death of over one million Muslims in Iraq after the US imposed a brutal and destructive war there? How does he account for the deaths of tens of thousands of innocent civilians in Afghanistan at the hands of the US forces?

The Muslim world does not view its relationship with the West through the prism of the 9/11; it does not think that the wars in Afghanistan or Iraq are legitimate. It sees its relationship with the West with regards to the foreign policies of the western countries. Justice may have been done and closure achieved for the families who suffered losses on 9/11, but the Muslim world stills mourns the death of millions of its sons and daughters with no justice and no closure in sight.

The American story is a story of power and virtue we keep telling ourselves as though it would quickly be forgotten or disbelieved if not reinforced through constant repetition. Yet what might be conceived as a form of self- and national affirmation serves no good if it refuses to accommodate reality. If our self-image is not informed and modified by the perceptions of others, it is no more than a conceit — a picture we can only believe in by refusing to see ourselves through the eyes of others.