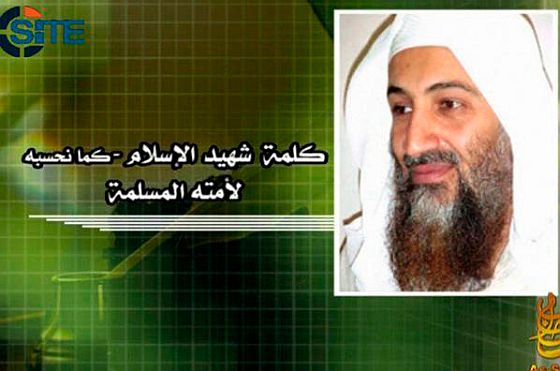 Just as the US media drone anticipating President Obama’s speech later this morning started to grow tiresome, Obama’s words got preempted by Osama’s.

I can’t help wondering what his assassination would have looked like if it had occurred immediately after he expressed support for the Arab Awakening.

In an audio message recorded shortly before his death, Reuters reports:

Bin Laden praised the Egyptian revolution and urged Arab protesters to maintain their momentum, adding: “I believe that the winds of change will envelope the entire Muslim world.”

“This revolution was not for food and clothing. Rather, it was a revolution of glory and pride, a revolution of sacrifice and giving. It has lit the Nile’s cities and its villages from its lower reaches to the top,” he said.

“To those free rebels in all the countries — retain the initiative and be careful of dialogue. No meeting mid-way between the people of truth and those of deviation.”

Bin Laden made no specific reference to Libya, Syria, Bahrain and Yemen, where pro-democracy protesters have had less success than in Egypt and Tunisia, but said Israel, reviled by many ordinary Arabs, was worried by the unrest.

Bin Laden called on young Arabs to consult “those of experience and honesty” and to set up a framework that would allow them to “follow up events and works in parallel… to save the people that are struggling to bring down their tyrants.”

How significant is Osama’s endorsement of the uprisings? It probably won’t have much influence on the average demonstrator in Syria, Bahrain, Libya, Egypt, or Yemen. But it might result in a few would-be jihadists joining the political mainstream.

Meanwhile, how much influence is Obama likely to have two years after his previous and much-hyped Cairo speech turned out to be hollow rhetoric?

Most common responses when I asked random Egyptians about watching Obama’s #MEspeech: He’s speaking? When? About what?