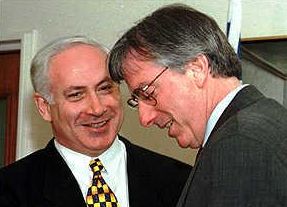 Mr. Ross is the most senior member of a coterie of American diplomats who have advised presidents stretching back to Ronald Reagan. Unlike many of his colleagues, Mr. Ross has thrived in Republican and Democratic administrations.

“Dennis is viewed as the éminence grise, a sort of Rasputin who casts a spell over secretaries of state and presidents,” said Aaron David Miller, a Middle East expert who has worked with him over several administrations and says he is an admirer. “But in the end, it’s the president who makes the ultimate decisions.”

Denis R. McDonough, the deputy national security adviser, said: “Dennis brings to the discussion a recognition of the vital importance of peace to the parties, but also to the United States. He’s in many ways dedicated much of his professional life to getting there.”

Mr. Ross initially began his tenure in the Obama administration as a senior Iran policy maker at the State Department. But in the summer of 2009, just a few months into his job at State, Mr. Ross moved to the White House, where he kept his Iran portfolio and eventually assumed a broader role that has allowed him to take part in developing Mr. Obama’s response to the upheavals in the Arab world.

His move came as the White House and Mr. Netanyahu were in a standoff over settlement construction. Over time, administration officials say, Mr. Ross took more of a role over Arab-Israeli policy. In September 2009, Mr. Obama abandoned his insistence on a settlement freeze in the face of Israeli recalcitrance.

“If Dennis Ross was in the inner circle in the early days, this administration would not have made that colossal settlements error,” Mr. Foxman said. “He would have said, ‘Don’t go there.’ ”

Once at the White House, Mr. Ross became invaluable, administration officials said, because of his close relationship not only with Mr. Netanyahu, but with the Israeli prime minister’s top peace negotiator, Yitzhak Molcho.

Mr. Ross demonstrated his growing influence last October, when the administration was pressing Mr. Netanyahu to agree to a three-month extension of his moratorium on settlement construction. Mr. Netanyahu balked.

So Mr. Ross devised a generous package of incentives for Israel that included 20 American fighter jets, other security guarantees, and an American pledge to oppose United Nations resolutions on Palestinian statehood. Many Middle East analysts expressed surprise that the administration would offer so much to Israel in return for a one-time, 90-day extension of a freeze.

1 thought on “Dennis Ross: Netanyahu’s man in the White House”