At Syria Comment, Joshua Landis has posted an article written by a contributor from Damascus — “the best piece of writing on Syria since the uprising began,” says Landis. The author requested that his identity not be disclosed and that the piece simply be given the byline “From Damascus.” He writes: 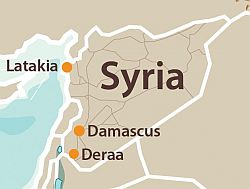 About a week ago I sat with a good friend from the muhafiza (governorate or county) of Dera’a. The raw account of events in Dera’a that he presented to me bore striking contrast to the opinions of people outside that area, people of Damascus, confused people trying to weigh the injustices vs. necessity of the military action in Dera’a.

Details of our conversation that might have been news at the time I spoke with him are now known by most readers at this late date: electricity, water, mobile phone service, land line telephone service, all cut off; rooftop water tanks, common in this area, are shot by military personnel; anyone who moves in the streets is shot. Furthermore, people who have used their own generators to provide power to their homes are visited by the military and the generators are promptly confiscated.

This friend (let’s call him Adham) has a sister and brother who both live in the city of Dera’a with their families. For weeks, they have had no word from them. They don’t even know if they or their children are alive. Adham’s brother was working in Damascus when the occupation of Dera’a began. He was unable to return home to his family. He cannot communicate with or receive any news from his wife or children. He has traveled recently to the city, hoping that after these weeks he would finally be allowed to reunite with his family, but has been prevented from doing so by the military that is keeping the city sealed off.

News that does trickle out of Dera’a seems to be coming from people who have Jordanian cell phones that sometimes find coverage in the area. People are using their car batteries to charge their cell phones, among other devices.

Many Damascenes continue to look me in the eye and tell me that “There’s nothing happening in Syria! Everything is fine!” Consider that Adham’s village in the muhafiza of Dera’a is closer to Damascus than it is to the city of Dera’a, and yet his family is without cell phone service, or even land-line service. Phone service of all types has been cut off from the entire muhafiza. When he comes to work in Damascus, he and his family have no way of checking on each other. This treatment is having the effect of galvanizing oppositional sentiment in the muhafiza and the growing sense of Dera’an separateness.

Adham is an atheist whose family is of Shia background. Being an atheist and coming from a Shia family, he is in no way sympathetic to Sunni Islamism. Therefore, it’s telling when he affirms that “there are no Salafiin in Dera’a. I can say for sure that any group of such people that exists is very, very small.”

Rather, he explains that the government’s siege has been effective in unifying the muhafiza of Dera’a against it. By treating the entire muhafiza as criminal, the sentiments of most of its inhabitants (not just those inside the city of Dera’a) have turned against the regime. It’s interesting that identity runs not only along religious, ethnic, and tribal lines, but also along geographical lines, in that the people of Dera’a—not only the city, but the entire muhafiza—are viewing themselves as a unit, separate from those who comprise the leadership of Syria. “I can say that 90% of people in the entire muhafiza are against the government,” Adham says. Rather than viewing the uprising as one of sectarian character, he explains that “my brother’s family in the city of Dera’a has Christian neighbors. There are many Christians in the city of Dera’a and in other villages who have joined in the protests.”

Dera’a is becoming a unit—I hesitate to say almost separate from Syria—not only in how people there are beginning to view themselves as separate from the state (an understandable effect after feeling attacked by the state), but in the way many other Syrians are reacting to Dera’ans. Adham tells me that in the hospital where he works in Damascus, he is experiencing a new, unmistakable resentment and coldness from his coworkers. “They say nothing, but I can see in their faces that they blame us for the current situation in Syria.” He says that he doesn’t feel safe responding to the opinions voiced by people in his workplace. He believes that people’s opinions are misled and mistaken, but if he defends “his own” Dera’ans, he fears reprisal.

“One Alawi girl who works in the hospital was very happy about the army entering the city. She said, ‘They must destroy the entire city and should kill everyone demonstrating.’” Her comments reflect the result of the government’s successful campaign to demonize the protesters; many people simply believe that there is an insidious cancer of extremism growing inside Syria, that threatens all life, security, and humane values, and that drastic measures are needed to thoroughly wipe it out.

In stark contrast to Adham’s understanding of the situation, I witnessed unreserved approval for the government crack down on a Thursday a week after the siege on Dera’a began. I visited some close Christian friends in Damascus who we can call Samer and Najwah. It was impossible not to broach the subject of the situation in Dera’a, knowing that the next day, Friday, would likely produce significant casualties. This household however, grimly viewed the army’s cordoning off and occupation of the city as necessity. I couldn’t help but begin to argue with them that even if there was a poisonous “Salafi” threat in the town, the siege and suppression would mean the suffering, trauma, and even killing of many innocent people as well. If some people from that area had indeed called for the establishment of an Islamic emirate (and it’s no surprise that some there would be oriented this way), I was just not convinced that the entire city, the many thousands protesting there, were all seeking such a goal.

For Najwah, however, the city of Dera’a has become a single entity containing one kind of people: bad. For her, the terrorist persuasion of the people in that community now justifies virtually any action against them. From her attitude, I felt that if the city was to be wiped off the map, she wouldn’t mind. I began to mention reports of the more grisly examples of violent killings there. “Good!” was her angry response.

I tried to think back and remember if I’d ever been in a country where serious atrocities were taking place and had looked in the eye of someone who rejoiced in them. I couldn’t, and I realized that I was witnessing the kind of passive approval for massacre that one reads about in history books, when individuals or groups become convinced of the evil of another and of the necessity of wiping them out. Najwah is not an evil woman, but the people of Dera’a have become completely vilified in her mind, and she fears them. [Continue reading…]