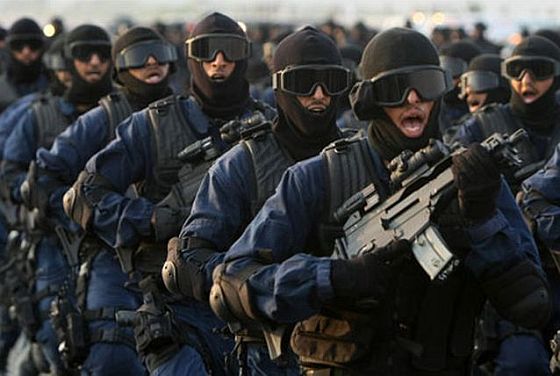 Nawaf Obaid, a Senior Fellow at the King Faisal Center for Research & Islamic Studies in Riyadh, is confident that Saudi Arabia has the military and economic strength sufficient to crush the aspirations for political freedom that threaten Saudi and other autocratic rulers across the region.

The so-called “Arab Spring” has not brought new life to the Middle East, but leaderless anarchy, creating a virtual pan-regional movement that is alarmingly dangerous and ultimately unsustainable.

Recognizing the threat that the spread of this movement represents, Saudi Arabia is expanding its role internationally and mobilizing its vast resources to help countries facing domestic upheaval.

As the birthplace of Islam and the leader of the Muslim and Arab worlds, Saudi Arabia has a unique responsibility to aid states in the region, assisting them in their gradual evolution toward more sustainable political systems and preventing them from collapsing and spreading further disorder.

That the Kingdom has the ability to implement this foreign policy goal should not be in doubt – it is backed by significant military and economic strength.

The foundation for this more robust strategic posture is Saudi Arabia’s investment of around $150 billion in its military. This includes a potential expansion of the National Guard and Armed Forces by at least 120,000 troops, and a further 60,000 troops for the security services at the Interior Ministry, notably in the special and various police forces. A portion of these will join units that could be deployed beyond the Kingdom’s borders.

In addition, approximately 1,000 new state-of-the-art combat tanks may be added to the Army, and the Air Force will see its capabilities significantly improve with the doubling of its high quality combat airplanes to about 500 advanced aircraft.

A massive new missile defense system is in the works. Finally, the two main fleets of the Navy will undergo extensive expansion and a complete refurbishment of existing assets.

As part of this new defense doctrine, the leadership has decided to meet the country’s growing needs for new equipment by diversifying among American, European and Asian military suppliers.