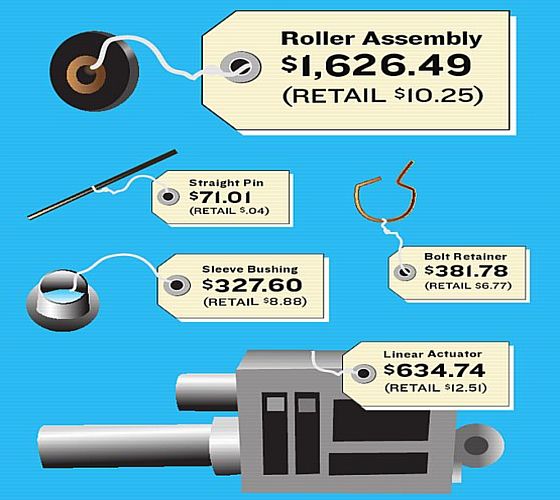 The Project on Government Oversight reports:

Taxpayers were massively overcharged in dozens of transactions between the Army and Boeing for helicopter spare parts, according to a full, unredacted Department of Defense Office of Inspector General (DoD OIG) audit that POGO is making public for the first time. The overcharges range from 33.3 percent to 177,475 percent for mundane parts, resulting in millions of dollars in overspending.

The May 3, 2011, unclassified “For Official Use Only” report is 142 pages. Prior to POGO’s publication of the full report, the only publicly available version was a 3-page “results in brief” on the DoD OIG’s website, first reported by Bloomberg News. The findings in the results in brief, while shocking on their own, pale in comparison to the detail contained within the full report. The DoD OIG scrutinized Army Aviation and Missile Life Cycle Management Command (AMCOM) transactions with Boeing that were in support of the Corpus Christi Army Depot (CCAD) in Texas. The audit focused on 24 “high-dollar” parts. Boeing had won two sole-source contracts (the second was a follow-on contract awarded last year) to provide the Army with logistics support—one of those support functions meant Boeing would help buy and/or make spare parts for the Army—for two weapons systems: the Boeing AH-64 Apache and Boeing CH-47 Chinook helicopters.

Overall, for 18 of 24 parts reviewed, the DoD OIG found that the Army should have only paid $10 million instead of the nearly $23 million it paid to Boeing for these parts—overall, taxpayers were overpaying 131.5 percent above “fair and reasonable” prices. The audit says Boeing needs to refund approximately $13 million Boeing overcharged for the 18 parts. Boeing had, as of the issuance of the audit, refunded approximately $1.3 million after the DoD OIG issued the draft version of its report. Boeing also provided a “credit” to the Army for another part for $324,616. The Army has resisted obtaining refunds worth several million dollars on some of the overpriced spare parts, in opposition to the DoD IG’s recommendations. For instance, one of the IG’s recommendations was that the Army should request a $6 million refund from Boeing for charging the Army for higher subcontractor prices even though Boeing negotiated lower prices from those subcontractors. In response, the Army said that “there is no justification to request a refund.”

In calculating what it says the Army should have paid, the DoD OIG assumed Boeing reasonably should charge a 34 percent surcharge fee for overhead, general and administrative costs, and profit, according to the audit report.

Above and beyond what the DoD OIG viewed as fair and reasonable (including the 34 percent surcharge), Boeing’s average overcharges to the Army for these 18 parts range from 33.3 percent to as much as 5,434 percent, based on the DoD OIG’s analysis.

What is even more shocking is the difference in prices the Army would have paid if it procured many of these parts directly from the Defense Logistics Agency (DLA) and from the Army’s own procurement offices, the audit shows. The largest percentage differences cited in the DoD OIG report—such as the 177,475 percent example (which is not among the 18 parts the report focuses on)—compare DLA unit prices to Boeing unit prices.

The amount the U.S. military spends annually on air conditioning in Iraq and Afghanistan: $20.2 billion.

That’s more than NASA’s budget. It’s more than BP has paid so far for damage during the Gulf oil spill. It’s what the G-8 has pledged to help foster new democracies in Egypt and Tunisia.

“When you consider the cost to deliver the fuel to some of the most isolated places in the world — escorting, command and control, medevac support — when you throw all that infrastructure in, we’re talking over $20 billion,” Steven Anderson tells weekends on All Things Considered guest host Rachel Martin. Anderson is a retired brigadier general who served as Gen. David Patreaus’ chief logistician in Iraq.

1 thought on “How Boeing ripped off American taxpayers”