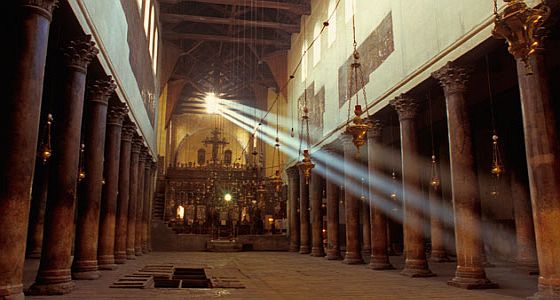 An editorial in The Hindu says:

Palestinians have yet again been denied their due. The recently concluded session of UNESCO’s World Heritage Committee rejected the first-ever Palestinian nomination. While it considered proposals from six West Asian countries, it overlooked Palestine’s proposal to include the Church of the Nativity in Bethlehem, one the oldest functioning churches, in the world heritage list. The proposal was rejected not on merits, but because UNESCO did not consider Palestine a sovereign state. Getting world heritage status has been critical to improving the protection of heritage sites. In 2002, the Israeli forces besieged and damaged parts of the Church of the Nativity, which is more than 1500 years old and a site of importance for Muslims as well. In 2005, experts listed many more instances of wanton destruction. For example, the Israeli Military Command destroyed 22 historic structures in the old city of Hebron, and permanent structures were built atop the archaeological site of Tell Rumeida. As recently as in 2010, instances of illegitimate appropriation of Palestinian monuments were reported. The hope was that a formal international recognition would serve as an additional deterrent and help Palestinians in nation-building.

Realising the urgent need to protect the cultural sites, UNESCO started training Palestinians to identify important heritage structures and implement the World Heritage Convention. In 2005, a list of 17 monuments located in historic cities such as Bethlehem and Nablus was published. Unfortunately, when it came to the critical phase of nomination, UNESCO, which might plead its hands are tied by convention and the limitations of international law, failed to demonstrate the innovativeness and progressive spirit expected of it. It needs to revisit the founding moments of the World Heritage movement. About 50 years ago, the world came together to save Abu Simbel. Collective concern and gravity of the situation compelled the international community to act creatively and boldly. UNESCO demonstrated some of these traits in 1981, when it overruled Israel’s objection and accepted Jordan’s proposal to nominate the old city of Jerusalem and its walls for the world heritage list. The reality is that many of the identified heritage sites are in areas administered by the Palestinian National Authority, which is an internationally accepted representative of the Palestinians, and the formation of Palestine State is inevitable. There is no convincing reason to further deny Palestine heritage sites the protection and recognition they deserve and urgently need.

1 thought on “Give Palestine its due”