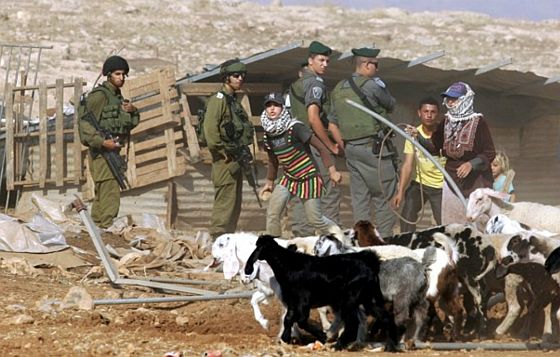 The Israeli troops and bulldozers arrived in the early morning and quickly got to work, tearing down shelters made of plastic netting and poles that had served as homes for about 100 people in this impoverished Bedouin community in the parched Jordan Valley.

The aftermath of the sweep last month against what Israeli authorities said were illegally built structures was still visible on a recent afternoon. Battered appliances, broken furniture, tattered clothing and other belongings that residents said they were prevented from removing were strewn in the dirt piled on the collapsed dwellings.

People took cover from the baking sun in makeshift tents constructed from the remains of their former homes and in others supplied by the Palestinian Red Crescent Society. Mobile tanks and electricity cables temporarily strung across the ground were the only sources of water and power.

“We have nowhere else to go,” said Talib Abayat, sitting in the shade of a lone tree.

The desolate scene reflected the state of the neglected Palestinian communities of the Jordan Valley, an area that amounts to more than a quarter of the West Bank but remains largely under Israeli control, with wide gaps between the resources allocated to Palestinians and Israeli settlers.

Running along the West Bank’s border with Jordan, the Jordan Valley has long been considered an area of strategic importance by Israel, and Prime Minister Binyamin Netanyahu has demanded a long-term military presence there as part of any future peace deal with the Palestinians.

Israeli settlements housing about 9,400 people line the road through the valley, scattered among ramshackle villages and encampments where about 80,000 Palestinians live. Nowhere in the West Bank is the contrast more stark between the settlements, with their intensively irrigated farmland, red-roofed homes and streets shaded by shrubs and trees, and the dusty Palestinian communities and their fields, dependent on limited water supplies.

A series of demolition operations last month underlined Israel’s claim to the area, which a recent poll showed most Israelis believe is part of Israel, not occupied territory, and populated mostly by Israelis. The poll was commissioned by the Association for Civil Rights in Israel.

Palestinian Prime Minister Salam Fayyad has asserted that there can be no Palestinian state without the Jordan Valley, which he called the Palestinian breadbasket. Yet with more than 70 percent of the area under Israeli control — designated as state land, military firing zones or nature reserves — the Palestinian Authority has little influence over the region’s development and the use of its resources.