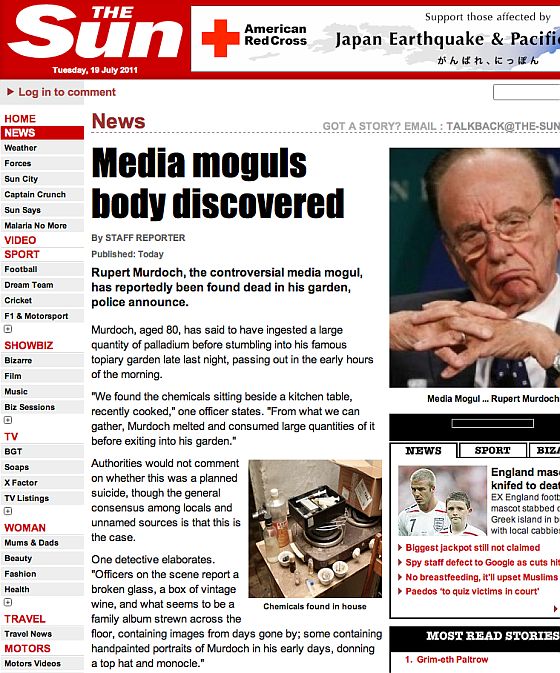 The web site of The Sun newspaper, part of News International which has been embroiled in the phone hacking scandal in the UK, has been hacked, apparently by hacker group Lulzsec, which tweeted “@LulzSec: We have owned Sun/News of the World – that story is simply phase 1 – expect the lulz to flow”.

The hack is a redirect to “http://www.new-times.co.uk/sun/” and contains a (clearly false) story about Rupert Murdoch being found dead. Ironically the domain ‘new-times.co.uk’ is registered to one News International Newspapers Limited.

Rupert Murdoch, the controversial media mogul, has reportedly been found dead in his garden, police announce. Murdoch, aged 80, has said to have ingested a large quantity of palladium before stumbling into his famous topiary garden late last night, passing out in the early hours of the morning.”

No doubt this is in reference to the tragic news tonight that a pivotal informer in the phone hacking scandal, Sean Hoare, was tonight found dead in his apartment, though Police are reporting the circumstances as ‘not suspicious’.