Does the death of Sean Hoare suggest that anyone who exposes wrongdoing inside the Murdoch empire is putting their life at risk? I don’t think so.

Hoare’s health had been compromised by alcohol and drug addiction. A few days before he died he got accidentally whacked on the head by a relative carrying a heavy pole as they took down a marquee at a children’s party. Reporters for the New York Times who dined with him in his last days described him as “ailing.”

The police force that ordered Hoare’s autopsy is the Hertfordshire force — not the Metropolitan police where officers accepted bribes from News International. The type of autopsy conducted was one ordinarily used in cases of suspicious death, even though investigators have not identified suspicious circumstances.

But now that News International has pulled the plug on its financial aid for Glenn Mulcaire and the world waits for him to break his silence, if he too suddenly dies then of course both deaths would be massively suspicious. Absent such an extraordinary turn of events, I think the reason other News Corp employees don’t speak out has more to do with fears for their wealth than their health.

In 2009, Fox News anchor Stuart Varney set the standard when it comes to the proposition that anyone on his payroll should dare challenge Emperor Murdoch.

Should we be surprised that a Fox journalist would assume such a supine position in relation to his boss? Only if we imagine News Corp attracts employees who are more interested in practicing journalism than they are in the size of their pay checks.

Consider the example of the editors of Murdoch’s Times of London. Today they assumed the posture of having greater concern about starvation in Somalia than they do about the phone hacking story and so they ran this cartoon: 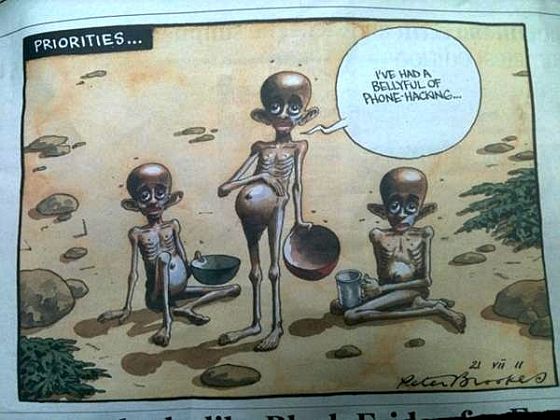 Does the situation in Somalia deserve greater media attention? Of course. But if the Times actually thinks its competitors’ priorities are skewed, how come they couldn’t find space for a single paragraph on Somalia on their own front page? 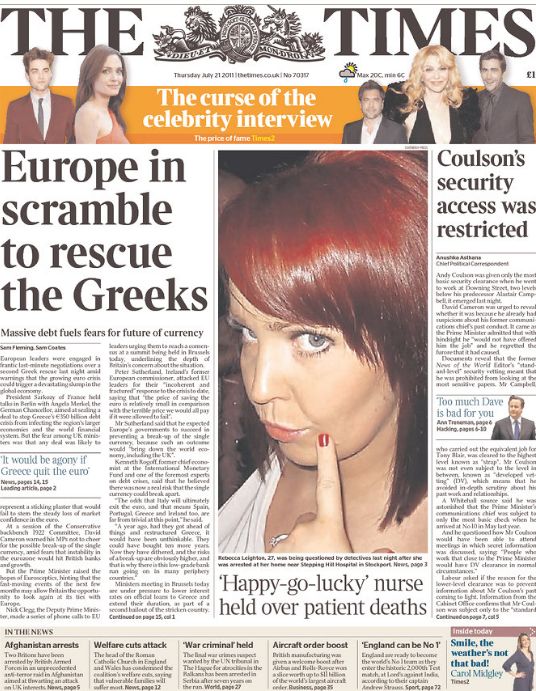 If a few of Murdoch’s employees are now having sleepless nights wondering whether they should speak out and risk losing their jobs, they must also know that the decision of any whistle-blower is one of the loneliest. Anyone who jumps off the Murdoch ship is unlikely to be quickly offered a lifeline from another.

The corporate media world of which the Murdoch empire is merely one part, does not foster a culture that rewards integrity. Team players are an asset; individuals with an unshackled conscience are risky. Those whose job it is to report, know that there are times when nothing is more highly prized by their employers than their silence.

2 thoughts on “Where are the next News Corp whistle-blowers?”