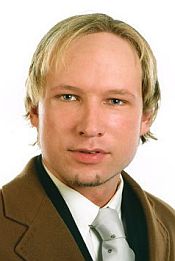 The 32-year-old Norwegian man who went on a shooting spree on the island of Utoya has been identified as Anders Behring Breivik, according to multiple reports.

The Daily Mail and Sky News were among those to report the suspect’s name. According to witnesses, the gunman was dressed as a police officer and gunned down young people as they ran for their lives at a youth camp.

Norwegian TV2 reports that Breivik belongs to “ring-wing circles” in Oslo. Swedish news site Expressen adds that he has been known to write to right-wing forums in Norway, is a self-described nationalist and has also written a number of posts critical of Islam.

The New York Times now reports that in the bombing and shootings is at least 87 people were killed.