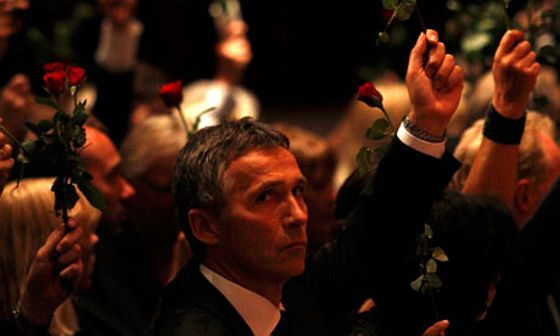 As Norway has demonstrated this week, anger is often nothing more than the inability to experience grief and acknowledge loss.

Exactly a week has passed since the twin terror attacks on Norway. As of this writing, the death toll stands at seventy-seven, and more than thirty people, mostly young, are still in the hospital, many of them seriously wounded by the dum-dum bullets used by Anders Behring Breivik. I walked Oslo’s streets again last night, from my newspaper’s office to the Parliament, the government offices, and the cathedral, to observe and understand the grief following the tragedy.

I’ve lived in Oslo for fifteen years, and I’ve never seen my city like this. An ocean of roses is now covering the streets of Oslo and the shores close to Utoya, thirty minutes away, to honor the dead and wounded. These hundreds of thousands of flowers have been brought by a never-ending flow of silent people, young and old. Never before has Norway seen so many people muted for such a long time.

They are also carrying Norwegian flags. We don’t wave our flag all the time the way Americans do, except on May 17th, our national holiday, celebrating the anniversary of the signing our constitution in 1814. In fact, carrying the national flag the rest of the year has been seen as a sign of overwrought patriotism.

Not any longer. Now the flag is again a source of pride, a silent celebration of the joy of being alive and of living in a privileged society. A society where it has long been a virtue to keep a cool head, but not necessarily a warm heart, as the Norwegian author Jo Nesbo noted in the New York Times this week.

In several ways Oslo today reminds me of New York City in the year or so after 9/11: the flags, the flowers, the improvised memorials on street corners and walls. But, more than this, I remember the new and kinder ways people treated each other, transforming the city into a warm, inclusive space. The countless small acts of solidarity in Oslo this week demonstrate that there are other ways to respond to severe threats to a nation than black-and-white thinking. A week later, it’s clear that Norway is working perfectly well even after a traumatic terror attack from within.

The most striking feature of Norway the past seven days is the captivating blend of public emotion and clearheaded, principled liberalism. Leading politicians, including Prime Minister Jens Stoltenberg and Mayor Fabian Stang, have been talking about love, compassion, and consideration. Their words have touched so many of us because they are neither cynical nor calculating—nor are they superficial.

1 thought on “On Norway’s emotional maturity”