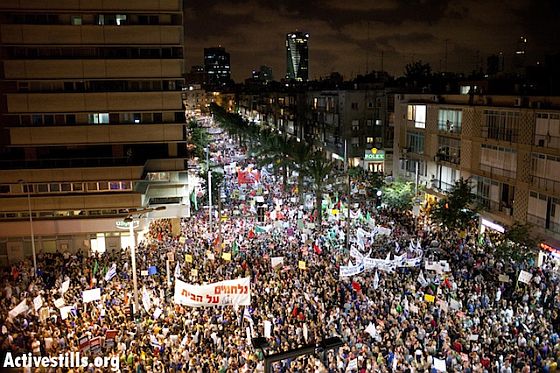 Around 300 thousands Israelis took the streets on Saturday night, calling for social justice and the introduction of a welfare state. Estimates are that this has been the largest demonstration in the country’s history.

The biggest of several rallies took place in Tel Aviv, where over 200,000 marched to the government building on Kaplan Street (Rabin Square, the usual site of such protests, is being renovated and was closed to the public). 30,000 marched in Jerusalem to PM Netanyahu’s house. Smaller rallies were held in Modi’in, Haifa, Nes Tziona and other towns. In Kiryat Shmone, protesters blocked the highway leading north.

Despite attempts by the organizers to convey a non-partisan message, many of the demonstrators directed their calls at Prime Minister Binyamin Netanyahu, and some held signs calling for his resignation. Former activist and Hadash MK called to the protesters: “With you, we will win over this pathetic government.” As was the case in previous rallies, the most popular call was “the people demand social justice,” followed by “Here comes the welfare state.”

Tel Aviv was bursting at the seams last night. It was not the mother of all protests – it was the grandmother of all protests. The city looked yesterday like one of the stormiest cities on earth. Streams of people were flowing in every direction, some on foot, some in cars. Buses and trains spewed out the crowds, and not everyone even managed to get to the area of the protest. An amazingly large sign, in Hebrew and Arabic – the latter is about to cease being an official language in this country – read “Egypt is here.”

Indeed, the pictures last night looked like the nights of Tahrir Square. Now the comparison to the Cairo revolution is not exaggerated or wishful thinking. Now it really does resemble it, not including the violence, of course.

And really, when size talks, as it did last night, violence is not needed. A regime that remains impassive to such gigantic rallies would be completely insensitive, and in any case is destined to fall.

Prime Minister Benjamin Netanyahu can go on joking with his ministers; his fate is sealed. The cynics can continue tsk-tsking and talking about the “confused” and “spoiled” protest, and yet, a protest it is, the likes of which has never been seen here.

2 thoughts on “Egypt comes to Israel”