The race for the Republican presidential nomination entered a new phase on Saturday as Gov. Rick Perry of Texas declared his candidacy in South Carolina and Michele Bachmann won a closely watched poll of voters in Iowa.

With Republican enthusiasm swelling over the prospect of defeating President Obama next year, thousands of party activists and voters converged here for the Iowa straw poll. The outcome provided a snapshot of the campaign that could help reorder the top tier of contenders as candidates move into a critical five-month stretch before the nominating contest begins.

“We did this together,” Mrs. Bachmann said, standing outside her campaign bus after she was declared the winner. “This is the very first step toward taking the White House in 2012.”

Ryan Lizza writes about how Bachmann has been deeply influenced by the evangelist and theologian Francis Schaeffer who produced a film series, “How Should We Then Live?” 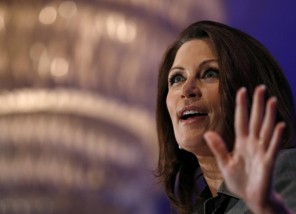 Schaeffer died in 1984. I asked his son Frank, who directed the movies—and who has since left the evangelical movement and become a novelist—about the change in tone [as the film series shifts from from art history and philosophy to conspiracy]. He told me that it all had to do with Roe v. Wade, which was decided by the Supreme Court while the film was being made. “Those first episodes are what Francis Schaeffer is doing while he was sitting in Switzerland having nice discussions with people who came through to find Jesus and talk about culture and art,” he said. But then the Roe decision came, and “it wasn’t a theory anymore. Now ‘they’ are killing babies. Then everything started getting unhinged. It wasn’t just that we disagreed with the Supreme Court; it’s that they’re evil. It isn’t just that the federal government may be taking too much power; now they are abusing it. We had been warning that humanism followed to its logical conclusion without Biblical absolutes is going to go into terrible places, and, look, it’s happening right before our very eyes. Once that happens, everything becomes a kind of holy war, and if not an actual conspiracy then conspiracy-like.”

Francis Schaeffer instructed his followers and students at L’Abri that the Bible was not just a book but “the total truth.” He was a major contributor to the school of thought now known as Dominionism, which relies on Genesis 1:26, where man is urged to “have dominion over the fish of the sea, and over the fowl of the air, and over the cattle, and over all the earth, and over every creeping thing that creepeth upon the earth.” Sara Diamond, who has written several books about evangelical movements in America, has succinctly defined the philosophy that resulted from Schaeffer’s interpretation: “Christians, and Christians alone, are Biblically mandated to occupy all secular institutions until Christ returns.” 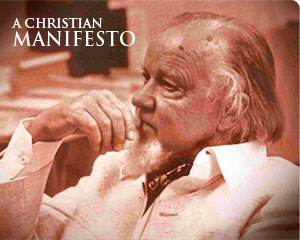 In 1981, three years before he died, Schaeffer published “A Christian Manifesto,” a guide for Christian activism, in which he argues for the violent overthrow of the government if Roe v. Wade isn’t reversed. In his movie, Schaeffer warned that America’s descent into tyranny would not look like Hitler’s or Stalin’s; it would probably be guided stealthily, by “a manipulative, authoritarian élite.”

Today, one of the leading proponents of Schaeffer’s version of Dominionism is Nancy Pearcey, a former student of his and a prominent creationist. Her 2004 book, “Total Truth: Liberating Christianity from Its Cultural Captivity,” teaches readers how to implement Schaeffer’s idea that a Biblical world view should suffuse every aspect of one’s life. She tells her readers to be extremely cautious with ideas from non-Christians. There may “be occasions when Christians are mistaken on some point while nonbelievers get it right,” she writes in “Total Truth.” “Nevertheless, the overall systems of thought constructed by nonbelievers will be false—for if the system is not built on Biblical truth, then it will be built on some other ultimate principle. Even individual truths will be seen through the distorting lens of a false world view.”

When, in 2005, the Minneapolis Star Tribune asked Bachmann what books she had read recently, she mentioned two: Ann Coulter’s “Treason,” a jeremiad that accuses liberals of lacking patriotism, and Pearcey’s “Total Truth,” which Bachmann told me was a “wonderful” book.

This spring, during one of her trips to Iowa, Bachmann asked the audience if anyone had heard of or seen “How Should We Then Live?” Many people applauded. She continued:

That also was another profound influence on Marcus’s life and my life, because we understood that the God of the Bible isn’t just about Bible stories and about Bible knowledge, or about just church on Sunday. He is the Lord of all of life. Every bit of life, including sociology, theology, biology, politics. You name the area and walk of life. He is the Lord of life. And so, as we went back to our studies, we looked at studying in a completely different light. Not for the purpose of a career but for a purpose of wondering, How does this fit into creation? How does this fit into the code and all of life that is about to come in front of us? And so we had new eyes that were opened up as we understood life now from a Biblical world view.