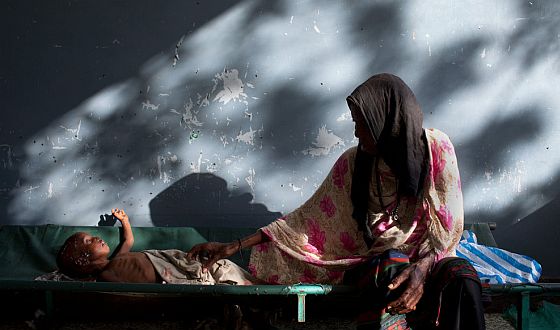 There are ways of talking about famine that don’t rely so heavily on emotional appeals and that instead relate the immediacy of human suffering to political and economic structures. News professionals are apt to insist that they have to focus on the emotive and the dramatic if they are to stand any chance of engaging their audiences. But, as Tom Mills of the New Left Project notes, there are grounds for thinking that the professionals have this one wrong. In 2002 Greg Philo summarised three major studies by the Glasgow Media Group that explored UK media coverage and public understanding of the developing world.

Philo noted “a widespread belief in broadcasting that audiences are not interested in factual programming about the developing world”. But though this view was widespread, there was little to support it. The Glasgow Media Group’s studies showed that audiences became much more engaged in stories about conflict in the Third World once they were able to situate what was happening in a broader explanatory context. As long as foreign news stories were presented as a series of disasters far away that had no connection with events at home, people’s interest was weak. Not only that, Philo’s interviewees would often say that the problems were down to the failure of people in poor countries to manage their affairs competently. Once it was pointed out that Western diamond and oil companies were helping to drive conflict in Angola, for example, people became much more engaged. The problems of ordinary people far away became more, not less, interesting as viewers were offered a structural account. Conflict is inexplicable without reference to resources and to the unaccountable financial infrastructure used to hide the spoils. Without an explanation that makes sense audiences will, not unreasonably, look elsewhere.

Like conflicts, famines are not inevitable and they do not happen in isolation from the rest of the world. A drought is a natural event. Mass starvation is not. It is political, insofar as it is the consequence of human decision-making. Under British rule millions of Indians starved to death as a result of food shortages. These famines, the British were sure, could not be avoided. They insisted they were the fault of the lazy and too numerous natives. Since independence the country has prevented famine from returning. Political will, not food, was the crucial thing missing in British India.

The BBC’s Andrew Harding reports that the current famine in Somalia is taking place in the midst of a longstanding conflict. Al-Shabab, a collection of Islamist groups, rules much of the country while the official government controls only part of the capital city. Though much of the region has experienced drought, the impact on human life has been far greater in Somalia. And the confrontation between various armed groups in Somalia is itself part of a struggle for resources and control throughout the Horn of Africa, in which America and other powers are deeply involved. Adequate coverage of the famine in Somalia, and the pattern of action and inaction that made it possible, must take into account the dynamics of this foreign intervention. And that in turn requires that journalists look steadily at the crackpot logic of the War on Terror.