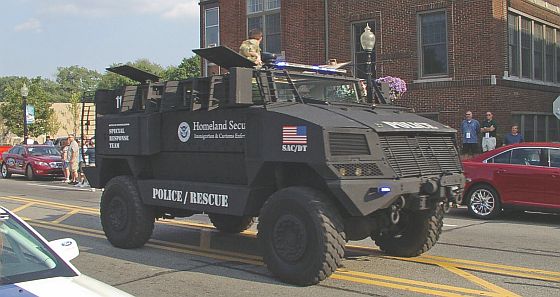 On the edge of the Nebraska sand hills is Lake McConaughy, a 22-mile-long reservoir that in summer becomes a magnet for Winnebagos, fishermen and kite sailors. But officials here in Keith County, population 8,370, imagined this scene: an Al Qaeda sleeper cell hitching explosives onto a ski boat and plowing into the dam at the head of the lake.

The federal Department of Homeland Security gave the county $42,000 to buy state-of-the-art dive gear, including full-face masks, underwater lights and radios, and a Zodiac boat with side-scan sonar capable of mapping wide areas of the lake floor.

Up on the lonely prairie, Cherry County, population 6,148, got thousands of federal dollars for cattle nose leads, halters and electric prods — in case terrorists decided to mount biological warfare against cows.

In the Los Angeles suburb of Glendale, where police fear militants might be eyeing DreamWorks Animation or the Disney creative campus, a $205,000 Homeland Security grant bought a 9-ton BearCat armored vehicle, complete with turret. More than 300 BearCats — many acquired with federal money — are now deployed by police across the country; the arrests of methamphetamine dealers and bank robbers these days often look much like a tactical assault on insurgents in Baghdad.

A decade after the Sept. 11, 2001, attacks on the World Trade Center and the Pentagon, federal and state governments are spending about $75 billion a year on domestic security, setting up sophisticated radio networks, upgrading emergency medical response equipment, installing surveillance cameras and bombproof walls, and outfitting airport screeners to detect an ever-evolving list of mobile explosives.

But how effective has that 10-year spending spree been?

“The number of people worldwide who are killed by Muslim-type terrorists, Al Qaeda wannabes, is maybe a few hundred outside of war zones. It’s basically the same number of people who die drowning in the bathtub each year,” said John Mueller, an Ohio State University professor who has written extensively about the balance between threat and expenditures in fighting terrorism.

“So if your chance of being killed by a terrorist in the United States is 1 in 3.5 million, the question is, how much do you want to spend to get that down to 1 in 4.5 million?” he said.

One effect is certain: Homeland Security spending has been a pump-primer for local governments starved by the recession, and has dramatically improved emergency response networks across the country.

An entire industry has sprung up to sell an array of products, including high-tech motion sensors and fully outfitted emergency operations trailers. The market is expected to grow to $31 billion by 2014.

Like the military-industrial complex that became a permanent and powerful part of the American landscape during the Cold War, the vast network of Homeland Security spyware, concrete barricades and high-tech identity screening is here to stay. The Department of Homeland Security, a collection of agencies ranging from border control to airport security sewn quickly together after Sept. 11, is the third-largest Cabinet department and — with almost no lawmaker willing to render the U.S. less prepared for a terrorist attack — one of those least to fall victim to budget cuts.

The expensive and time-consuming screening now routine for passengers at airport boarding gates has detected plenty of knives, loaded guns and other contraband, but it has never identified a terrorist who was about to board a plane. Only 14 Americans have died in about three dozen instances of Islamic extremist terrorist plots targeted at the U.S. outside war zones since 2001 — most of them involving one or two home-grown plotters.

Homeland Security officials say there is no way to compute how many lives might have been lost had the nation’s massive security apparatus not been put into place — had the would-be bombers not been arrested before they struck, or deterred from getting on a plane because it was too hard.

“We know that they study our security measures, we know they’re continuously looking for ways to get around them, and that’s a disincentive for someone to carry out an attack,” said John Cohen, the department’s deputy counter-terrorism coordinator.

“Another way of asking the question is: Has there been a U.S. airplane that has exploded?”

State and local emergency responders have undergone a dramatic transformation with the aid of $32 billion that has been dispensed in Homeland Security grants since 2002, much of it in the early years spent on Hollywood-style tactical gear, often with little connection between risk and outlay.

“After 9/11, it was literally like my mother running out the door with the charge card,” said Al Berndt, assistant director of the Emergency Management Agency in Nebraska, which has received $163.7 million in federal anti-terrorism and emergency aid grants. “What we really needed to be doing is saying, ‘Let’s identify the threat, identify the capability and capacity you already have, and say, OK, what’s the shortfall now, and how do we meet it?’ ”

The spending has been rife with dubious expenditures, including the $557,400 in rescue and communications gear that went to the 1,500 residents of North Pole, Alaska, and a $750,000 anti-terrorism fence — fashioned with 8-foot-high ram-proof wrought iron reinforced with concrete footers — built around a Veterans Affairs hospital in the pastoral hills outside Asheville, N.C.

West Virginia got $3,000 worth of lapel pins and billed the federal government for thousands of dollars in cellphone charges, according to the Center for Investigative Reporting, which compiled a state-by-state accounting of Homeland Security spending. In New York, $3 million was spent on automated public health records to help identify bioterrorism threats, but investigators for the department’s inspector general in 2008 found that employees who used the program weren’t even aware of its potential bioterrorism applications.

1 thought on “Counter-terrorism Inc. — How the US government funds America’s booming security industry”