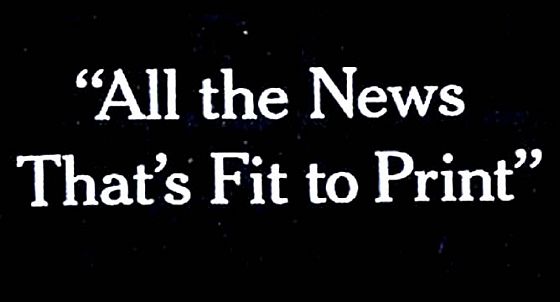 At Adbusters, Matthew A. Taylor writes:

Although the spin is hard to detect for the average reader, New York Times reportage of Middle East affairs is perniciously biased. In their seminal book, Israel-Palestine on Record: How the New York Times Misreports Conflict in the Middle East, Princeton professor Richard Falk and media critic Howard Friel argue that “the Times regularly ignores or under-reports a multitude of critical legal issues pertaining to Israel’s policies, including Israel’s expropriation and settlement of Palestinian land, the two-tier system of laws based on national origin evocative of South Africa’s apartheid regime, the demolition of Palestinian homes, and use of deadly force against Palestinians.” In other words, what is not said by the New York Times may be even more important than what is said.

In June of 2010, a year and a half after the Israeli military launched what a United Nations investigation described as “a deliberately disproportionate attack designed to punish, humiliate and terrorize a civilian population,” the New York Times sent a photographer into Gaza to capture a slice of daily life. Ethan Bronner, the Times Jerusalem bureau chief, wrote the narrative for the photo essay entitled “Gaza, Through Fresh Eyes,” in which he gushes about “jazzy cellphone stores and pricey restaurants … endless beaches with children whooping it up … the staggering quality of the very ordinary.” Seemingly lifted from an apolitical travel magazine, Bronner’s article merely alludes to families who have been “traumatized,” and omits any mention of the UN allegations of recently committed Israeli war crimes and human rights violations. Other than an oblique reference to “destroyed buildings” and “rubble,” Bronner’s travelogue also elides the vast civilian infrastructure Israel destroyed during the onslaught, including chicken farms, a flour mill, a sewage treatment plant, a UN school, vast tracts of civilian housing, government buildings, a prison, police stations, TV stations, newspapers … and between 600 and 700 factories, workshops and businesses. The impression left by Bronner? Gaza is an OK place; nothing remarkable to see there, least of all evidence of Israeli war crimes; move along, move along.

3 thoughts on “On Israel, the New York Times is perniciously one-sided”