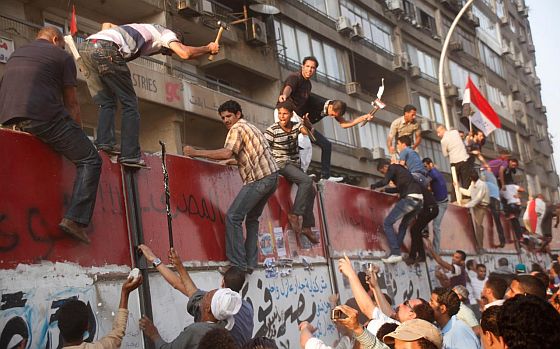 A group of about 30 protesters broke into the Israeli Embassy in Cairo Friday and dumped hundreds of documents out of the windows after a day of demonstrations outside the building in which crowds swinging sledge hammers and using their bare hands tore apart the embassy’s security wall.

Israel’s ambassador, Yitzhak Levanon, his family and other embassy staff rushed to Cairo airport and left on a military plane for Israel, said airport officials who spoke on condition of anonymity because they were not authorized to speak to the media.

Israeli officials refused to comment on the ambassador’s departure.

Hundreds of protesters converged on the embassy throughout the afternoon and into the night, tearing down large sections of the graffiti-covered security wall outside the 21-story building housing the embassy. Egyptian security forces made no attempt for hours to intervene.

Just before midnight, a group of protesters reached a room on one of the embassy’s lower floors at the top of the building and began dumping Hebrew-language documents from the windows, said an Egyptian security official who spoke on condition of anonymity because he was not authorized to speak to the media.

In Jerusalem, an Israeli official confirmed the embassy had been broken into, saying it appeared the group reached a waiting room on the lower floor. He spoke on condition of anonymity because he was not permitted to release the information.

No one answered the phone at the embassy late Friday.

Meanwhile, U.S. President Barak Obama spoke with Prime Minister Benjamin Netanyahu about the situation at the Israeli Embassy in Cairo.

The President’s office said in a statement that Obama expressed great concern about the situation at the Embassy, and the security of the Israelis serving there.

The statement said Obama “reviewed the steps that the United States is taking at all levels to help resolve the situation without further violence, and to call on the Government of Egypt to honor its international obligations to safeguard the security of the Israeli Embassy.”

Obama and Netanyahu agreed to stay in close touch until the situation is resolved.