Benjamin Netanyahu promised to tell the truth at the United Nations, and the truth was indeed revealed. The prime minister chose in this speech to quote reverently from his meetings with one person only: the Lubavitcher Rebbe, who viewed himself as the messiah.

Neither the source nor the inflammatory quotation was coincidental. Netanyahu was intimately acquainted with the Rabbi King Messiah, and also with the views he expressed from on high. The rebbe’s followers stood behind Netanyahu’s victorious campaign in the 1996 election, which following the incitement-filled demonstrations and Yitzhak Rabin’s assassination, with the slogan “Netanyahu is good for the Jews.” And on Sunday, the prime minister’s entourage was sent to genuflect at the rebbe’s court. 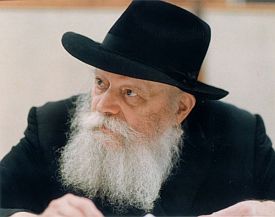 The Lubavitcher Rebbe was famous for his vehement opposition to even the tiniest withdrawal from any territory ever held by the Israel Defense Forces, even in the framework of full peace. He even opposed withdrawing from territory on the other side of the Suez Canal. In his view, not one inch of the Holy Land could be given to the Arabs. He based this opposition on both security concerns – that missiles would be deployed on any vacated territory – and religious-historical arguments. Netanyahu reiterated both claims in his speech to the United Nations.

The most prominent emissaries of the Lubavitcher Rebbe – the great rabbi, as Netanyahu termed him at the United Nations – included Baruch Goldstein, perpetrator of the 1994 Hebron massacre, and Yitzhak Ginsburg, the rabbi of Yitzhar, he of the radical books “Baruch the Man” (which celebrates the massacre ) and “The King’s Torah: The Laws of Killing Gentiles.” Nor was this by chance. The Lubavitcher Rebbe inculcated his followers with the doctrine of “your people are the land’s only nation”: In the land of the messiah, there is no room for Arabs. Thus racism entered Netanyahu’s speech at the United Nations – not “merely” against Islam, but also against Arabs: They, he said, are not like your neighbors in New York.

But Netanyahu, whose speech was steeped in religious extremism, surpasses even his rabbi. For all his hatred of Arabs, the Lubavitcher Rebbe never incited against Jews. Netanyahu – from the demonstrators chanting “with blood and fire we’ll expel Rabin” through the whispers that “the left has forgotten what it is to be Jewish” to his links with the radical Im Tirtzu organization – has also engaged in domestic incitement.

The Quartet’s plea that Netanyahu, of all people, should bring about a full withdrawal from the occupied territories and Arab East Jerusalem within a year is thus pathetic. It is like wishing that Michele Bachmann would turn America into a welfare state or that Eli Yishai, leader of the ultra-Orthodox Shas party, would separate religion and state.

Bill Clinton, someone with vast experience of Netanyahu, had it right: The man is not interested in peace and compromise. Netanyahu opposed peace with Egypt and the first Oslo accord. He led a campaign of incitement against the Oslo-2 agreement and then refused to implement it. Ariel Sharon, Rafael Eitan and then-Israel Defense Forces Chief of Staff Amnon Lipkin-Shahak were stunned by what they interpreted as his willingness to consider arming doomsday weapons in the face of Saddam Hussein’s threats, and they worked to dissuade him. Netanyahu opposed the pullouts from Lebanon and Gaza, and not because he thought they should have been done by agreement. Nor did he respond to Mahmoud Abbas’ moderation by taking advantage of the opportunity: Instead, he waged a campaign of incitement to preempt any chance of a deal and a withdrawal.

After all, he is the emissary of the Chabad messiah, the man who taught that this is the Jews’ land exclusively. He returned from the United States with the feeling that the American government is a rag to wipe his feet on, with no power to stop his most extremist plans.

This is the background to what must become a global understanding of the issue that is now most important of all, which will also be the main topic of U.S. Defense Secretary Leon Panetta’s visit. Netanyahu is completely serious in his desire, and also in his preparations to circumvent the warnings of the entire defense establishment in order to implement this desire, which many of those in his inner circle have defined as messianic: to attack Iran before winter. Before the clouds come, anyone who can stop him must do so.

3 thoughts on “Netanyahu’s messianism could launch attack on Iran”