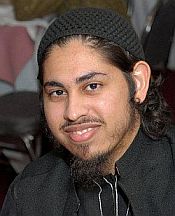 The fact that President Obama decided to target the US citizen Anwar Awlaki for extra-judicial execution, is a subject of considerable controversy. What is arguably even more questionable is the killing of Awlaki’s American companion at the time of the Hellfire missile strike in Yemen yesterday: Samir Khan.

Khan, who grew up in New York and North Carolina, had been the subject of a criminal investigation, yet the FBI could not find sufficient evidence to indict him. Neither had he been included on Obama’s list of people who he claims the right to execute, but he got killed anyway.

CNN says intelligence professionals “see Khan’s death as a ‘two-fer,’ with al-Awlaki being the primary target.”

If there is any kind of official explanation about what happened — not that we’re likely to hear one from a president who clearly values secrecy more than accountability — how might it go?

Khan’s presence alongside Awlaki was a happy coincidence? His shredded body was a welcome piece of collateral damage?

Or, Obama’s authorization was sought and Khan’s was a kind of two-for-the-price-of-one impulse killing.

What can reasonably be inferred is that careful consideration had already been given to whether Khan could be legitimately targeted and the conclusion was that he could not — hence, even though he had long been known to be in Yemen and been responsible for producing al Qaeda’s English-language Inspire magazine, he had not been added to Obama’s target list.

The targeted killing program violates both U.S. and international law. As we’ve seen today, this is a program under which American citizens far from any battlefield can be executed by their own government without judicial process, and on the basis of standards and evidence that are kept secret not just from the public but from the courts. The government’s authority to use lethal force against its own citizens should be limited to circumstances in which the threat to life is concrete, specific, and imminent. It is a mistake to invest the President — any President — with the unreviewable power to kill any American whom he deems to present a threat to the country.

The execution of Samir Khan would seem to indicate that Obama took a step even further: he claims the right to kill any American — even those whom he does not deem to present a threat to the country!

4 thoughts on “How did Obama decide to execute Samir Khan?”