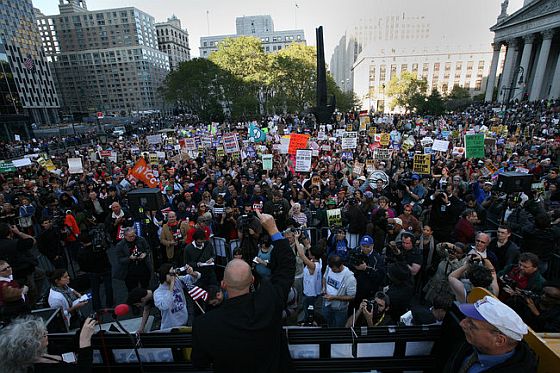 The Occupy Wall Street protest got reinforcements on Wednesday, when several major unions joined in a march and a rally.

If the idea of camping out on Wall Street doesn’t have mass appeal, “we are the 99%” that has been shortchanged by bankers and corporate power and an unrepresentative political system, is a message of solidarity that resonates across America.

New York Times: Stuart Appelbaum, an influential union leader in New York City, was in Tunisia last month, advising the fledgling labor movement there, when he received a flurry of phone calls and e-mails alerting him to the rumblings of something back home. Protesters united under a provocative name, Occupy Wall Street, were gathering in a Lower Manhattan park and raising issues long dear to organized labor.

And gaining attention for it.

Mr. Appelbaum recalled asking a colleague over the phone to find out who was behind Occupy Wall Street — a bunch of hippies or perhaps troublemakers? — and whether the movement might quickly fade.

So far, at least, it has not, and on Wednesday, several prominent unions, struggling to gain traction on their own, made their first effort to join forces with Occupy Wall Street. Thousands of union members marched with the protesters from Foley Square to their encampment in nearby Zuccotti Park.

Ezra Klein: Right now, the protests are at a tipping point. The unions and MoveOn.org are mounting a sympathy march this afternoon. Van Jones’s Rebuild the Dream and Russ Feingold’s Progressives United are blasting messages of support. Prominent elected Democrats such as Rep. John Larson, Chairman of the House Democratic Caucus; Rep. Louise Slaughter, ranking member on the House Rules Committee; and Sen. Jeff Merkley have all applauded the movement.

What these Democrats and liberal-activist groups are looking for is something similar to what conservatives found in the tea party: an opportunity to recharge and rebrand. Governance exhausts a movement. The compromises sap it of its purity; the institutional ties rob it of its authenticity; and in times when the American people are unhappy, the consequences undermine its agenda. In 2009, that’s where the Republicans were. The Bush administration had left them identified with an unpopular president, yoked to a terrible economy and discredited as a governing force. So they stopped being Bush Republicans and became Tea Party Republicans.

In 2011, elected Democrats and activist groups affiliated with the Democratic Party are in a similar situation. They’ve compromised on their agenda. They’re yoked to a terrible economy and an unpopular president. They’ve watched the grass-roots energy migrate to the tea party right. They no longer hold the mantle of change. And here, all of a sudden, comes Occupy Wall Street, which seems to have tapped into the zeitgeist, and the slogan “We are the 99 percent,” which is something every liberal message man in town wishes he had come up with. You can see the appeal.

That isn’t to say these groups are trying to co-opt Occupy Wall Street. They’re not. Or, at least, they don’t think they are. They just want some of that grass-roots magic, too. They see a space opening up for aggressive, populist organizing, and they want in on it.

The Plum Line: “I’m really encouraged by what I’m seeing. People around the country are finally organizing to stand up to the huge influence of corporations on government and our lives. This kind of citizen reaction to corporate power and corporate greed is long overdue.”

That’s Russ Feingold, who spoke with me yesterday in order to voice his strong support for Occupy Wall Street, making him one of the most prominent liberal Democrats in the country to endorse the protests. Feingold’s strong backing will be seen as significant by the movment’s supporters, because thus far few elected Dems have publicly voiced support for it.

Feingold’s career has been all about fighting the influence of corporate money over politics — he championed campaign finance reform, opposed deregulation and voted against Obama’s Wall Street reform bill because it didn’t go far enough — so he has an interesting perspective on the budding movement.

Feingold rejected the argument — made even by some of Occupy Wall Street’s sympathizers — that it has failed to articulate a clear message or agenda, arguing that the coalescing of outrage itself is the story and the message here, even if it seems incohate at times.

“The guys who are protesting are not filing legal briefs,” he said. “They are expressing the populist, genuine view that people have been ripped off. It’s a fundamental identification of the fact that people are getting taken for a ride by powerful interests who are getting away with murder.”

Washington Post: Prominent House Democrats are embracing the Occupy Wall Street protests as demonstrations are spreading across the country and gaining support from traditional progressive institutions. Democratic leaders in Congress say that there’s a lot to like about movement’s central message that corporate greed is fueling a growing income gap. And the enthusiasm from Democrats in Washington suggests that they think this sentiment will resonant across the country.

Describing the protests as “serious” and “encouraging,” Rep. Peter Welch (D-Vt.) praised the sentiment motivating Occupy Wall Street and called for Congress to take heed. “It’s got a clear message, and that is frustration with the way that business is being done, the way that wealth is tilting towards the high end and the middle class is shrinking. And that message needs to be given,” Welch, a member of the Congressional Progressive Caucus, told me on Wednesday. What’s more he added, “it’s a real grassroots, citizens-led initiative. It’s not a top-down effort, it’s bottom up. In that sense, I think it’s very similar to the tea party.”

Other progressive Democrats are even more enthusiastic. “I’m so proud to see the Occupy Wall Street movement standing up to this rampant corporate greed and peacefully participating in our democracy,” said Rep. Louise Slaughter (D-NY). The co-chairs of the Progressive Caucus, Reps. Keith Ellison and Raul Grijalva, issued a joint statement to express “solidarity” with the movement, describing themselves as inspired by the mass movement. “We join the calls for corporate accountability and expanded middle-class opportunity,” they wrote. “The silent masses aren’t so silent anymore. They are fighting to give voice to the struggles that everyday Americans are going through,” added Rep. John Larson in his own statement supporting Occupy Wall Street.

Time: As the momentum surrounding the Occupy Wall Street protest grows, so too has the urge to frame it in the context of other struggles around the world. Already, Zuccotti Park, the patch of Lower Manhattan taken over for weeks now by the protesters, has been hailed as an American Tahrir Square, a font for a “U.S. autumn” as that plaza in Cairo was for the Arab Spring. Days of action and protest have been dubbed “days of rage,” a gesture to recent, far bloodier episodes of dissent on the streets of Syria, Yemen, Bahrain and elsewhere in the Middle East. When some 700 activists were detained while marching across the Brooklyn Bridge over the weekend, they were, according to some reports, “kettled” — a tactic used by London’s Metropolitan Police against student demonstrators frequently over this past year. And a colleague of mine asked whether the protesters were the left’s answer to the far-right U.S. Tea Party.

Yet no parallel seems more apt than what’s been taking place immediately across the Atlantic in Spain. The indignados, the outraged, have massed in Madrid and other cities across the country since May, furious at the debt-ridden nation’s turn toward austerity measures at a time of over 20% unemployment and enraged by the haplessness and incapacity of political leaders and prevailing global economic institutions to stave off catastrophe. The occupations of iconic squares like Madrid’s Puerta del Sol are in some sense the template followed now by American protesters in a growing number of cities — around 148, according to organizers in Lower Manhattan — across the United States.

“We see ourselves as the continuation of this global movement,” says Patrick Bruner, who, at the time of writing, was the designated press secretary of Occupy Wall Street. “And it’s now springing up in a place where most of the world’s problems originated — Wall Street.” Not surprisingly, sensing the importance of what’s transpiring in Manhattan, organizers in Spain have already called for Oct. 15 to be a global day of action.

Who are we? Well, who are you? If you’re reading this, there’s a 99 percent chance that you’re one of us.

You’re someone who doesn’t know whether there’s going to be enough money to make this month’s rent. You’re someone who gets sick and toughs it out because you’ll never afford the hospital bills. You’re someone who’s trying to move a mountain of debt that never seems to get any smaller no matter how hard you try. You do all the things you’re supposed to do. You buy store brands. You get a second job. You take classes to improve your skills. But it’s not enough. It’s never enough. The anxiety, the frustration, the powerlessness is still there, hovering like a storm crow. Every month you make it is a victory, but a Pyrrhic one — once you’re over the hump, all you can do is think about the next one and how much harder it’s all going to be.

They are the 1 percent. They are the banks, the mortgage industry, the insurance industry. They are the important ones. They need help and get bailed out and are praised as job creators. We need help and get nothing and are called entitled. We live in a society made for them, not for us. It’s their world, not ours. If we’re lucky, they’ll let us work in it so long as we don’t question the extent of their charity.

We are the 99 percent. We are everyone else. And we will no longer be silent. It’s time the 1 percent got to know us a little better.