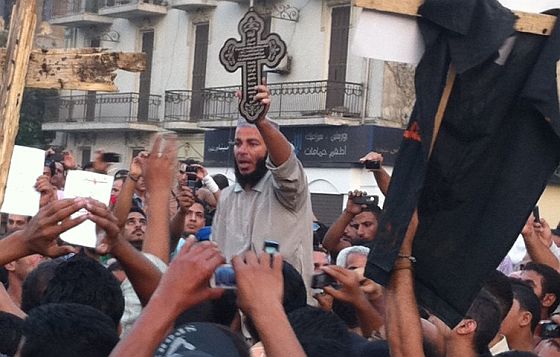 Muslims and Christians unite in protest against Egypt's military council

Al-Masry Al-Youm reports: In the wake of Sunday’s violence between Coptic demonstrators and military forces in Cairo, political party leaders and activists called for an immediate transfer of power to civilian authorities, the establishment of a civilian presidential council to help manage the transition period, and the dismissal of Prime Minister Essam Sharaf’s government.

In a conference Monday morning, politicians criticized the security vacuum as well as the state media’s deceptive coverage of the violence.

Twenty-five protesters died, according to the Health Ministry, when a march by Copts was attacked by thugs and military forces. The march started in the largely Christian neighborhood of Shubra to protest against attacks on Christians, most notably a recent attack on a church in the Upper Egyptian city of Aswan, which resulted from the construction of a dome.

The military prosecution began to investigate 25 suspects on Monday.

“We as Egyptians are facing a problem. It’s not a Coptic and Muslim problem. It’s not a military or civilians problem, but it’s a problem in Egypt’s flawed society and inter-relations. This could end up in a civil war,” said Amr Moussa, a potential presidential candidate and former foreign minister under Mubarak.

Moussa stressed the importance of ruling with an iron-fist in order to protect the country from looming chaos.

Meantime, Abdel Gelil Mostafa, leader of the National Association for Change, slammed the Mubarak-like rule of the Supreme Council of Armed Forces (SCAF), describing it as “semi-divine.”

Speakers at the conference issued calls for a civilian council to serve as Egypt’s executive authority, instead of SCAF, echoing demands made by Mohamed ElBaradei and other secular political figures shortly after Mubarak stepped down in February.

Ursula Lindsey writes: The automatic goverment agit-prop on this is almost as bad as the deaths. Every single (Arabic language) Egyptian newspaper with the exception of Tahrir newspaper led with stories and images today that emphasized the violence on the part of the demonstrators, not the army. Al Ahram’s disingenuous headine reads: “Twenty-Four Soldiers and Demonstrators Dead.” It really is a full return to the days of the revolution.