Sarah Carr writes: The march from the Cairo district of Shubra was huge, like the numbers on 28 January. In the front row was a group of men in long white bibs, “martyr upon demand” written on their chests. A tiny old lady walked among them, waving a large wooden cross: “God protect you my children, God protect you.” 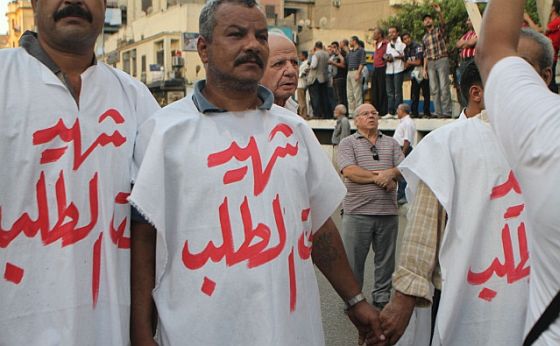 The march started down Shubra Street around 4 pm, past its muddle of old apartment buildings, beat up and sad but still graceful compared with the constructions from the Mubarak era next to them – brutish and unfinished-looking.

A man explained why there were bigger numbers than the march last week in response to the attack on the St. George’s Church in Aswan: the army had hit a priest while violently dispersing Coptic protesters in front of the Maspiro state TV building on Wednesday. A video posted online showed a young man being brutally assaulted by army soldiers and riot police.

At a traffic underpass at the end of Shubra Street, at around 6 pm, there was the sudden sound of what sounded like gunfire. Protesters at the front told those behind to stop – the march was under attack. Rocks rained down from left and right and from the bridge, underneath which protesters were taking shelter.

Some threw stones back. Behind them, protesters chanted, “The people want the removal of the Field Commander.” The stone throwing eventually stopped sufficiently for the march to continue. A teenage boy crossed himself repeatedly as he moved forward toward the rocks.

Darkness fell just as the march reached Galaa Street. “This is our country,” protesters chanted, led by a man on a pickup truck full of speakers. An illuminated cross floated through the darkness. At the headquarters of state daily newspaper Al-Ahram, a single rock was thrown at the door, likely a comment on its coverage of violence against Copts.

Outside the Ramsis Hilton Hotel, the chanting stopped momentarily – the exuberance of having escaped the attack in Shubra faded as the march rounded the corner toward Maspiro.

It was immediately met with gunfire in the air. As protesters continued moving forwards, the gunfire continued.

Suddenly, there was a great surge of people moving back, and something strange happened. Two armored personnel carriers (APCs) began driving at frightening speed through protesters, who threw themselves out of its path. A soldier on top of each vehicle manned a gun, and spun it wildly, apparently shooting at random although the screams made it difficult to discern exactly where the sound of gunfire was coming from.

It was like some brutal perversion of the military show the armed forces put on for the 6th of October celebration three days before. The two vehicles zigzagged down the road outside Maspiro underneath the 6th of October Bridge and then back in synchronicity, the rhythm for this particular parade provided by the “tac tac tac” of never-ending gunfire, the music the screams of the protesters they drove directly at.

And then it happened: an APC mounted the island in the middle of the road, like a maddened animal on a rampage. I saw a group of people disappear, sucked underneath it. It drove over them. I wasn’t able to see what happened to them because it then started coming in my direction.

Later, as riot police fired tear gas at another small attempt at a demonstration and fires burned around Maspiro, I found on the floor part of one of the white “martyrs upon demand” bibs the men had been wearing, and took it home. It had been ripped in half.