Foreign Policy: What do you think of the Occupy Wall Street protests? Have you been down to see them?

Nouriel Roubini: I stopped by. My view of it is that it is a symptom of the economic malaise that we’re facing not just in the United States, but all over the world. It started with the Arab Spring, and of course, poverty, unemployment, corruption, inequality eventually leads to people becoming restless. But now, you have middle-class people in Israel saying we cannot afford homes; you have middle-class students in Chile saying we don’t have education; you have riots in London; people smashing Mercedes and BMWs of fat cats in Berlin and Frankfurt; you have an anti-corruption movement in India. It takes a lot of different manifestations, but we live in a world with a lot of economic insecurity, of worries about the future, of inequality, poverty, of concerns about jobs. And [Occupy Wall Street] is the manifestation in the U.S.

In 2009, [President Barack] Obama told the bankers, “I’m the only one who’s standing between you and the pitchforks.” The bankers got the bailouts; they were supposed to extend credit, extend mortgages. They did pretty much nothing, and they went back to the same actions as before: making money through trading. At this point, I think people are fed up with it. Rightly or wrongly, there’s a huge amount of anger.

FP: Ian, do you think the so-called 1 percent feels any pressure to change its practices?

Ian Bremmer: Less than you think. It’s very clear that there is rising animosity toward the financial sector. It’s true in the United States and in Europe, as well. And I do think these economic protests have legs, even though they’re very poorly organized and it’s not entirely clear what they are or what the agenda is. And I say that because we’re in an election year and there are a lot of wealthy, vested interests that are both on the Democratic and the Republican side that will try to throw money at these guys and tap into some of that anger. We’ll see where it goes.

Having said that, the United States is not Egypt. It’s not as if you have unemployment in the U.S. and as a consequence people starve. You still have a lot of political apathy in the United States. You also have a country — frankly, much like Saudi Arabia — where a lot of immigrants come in and take jobs that the average American, even an unemployed American, wouldn’t necessarily want. 9.1 percent unemployment is very, very high, and it’s an outrage in this country to have that level of sustained unemployment. Yet it appears to be something that Washington is prepared to tolerate. We don’t see an urgency in Washington to truly address the issue, certainly nothing like the urgency you see in Europe today.

So I don’t think the 1 percent is coming under the kind of pressure that would force them to take a different position.

NR: I would make the point that, however, while I agree with what Ian says, that the “official” unemployment rate is 9.1 percent — but the one that includes discouraged workers who have left the labor force or partially unemployment has gone from 16.2 percent to 16.5 percent. And if you add to it the millions of people that you have in jail in the U.S. — which is four times the amount of any civilized country as a share of population — than unemployment is probably closer to 20 percent. And that’s just among the average population. For minorities, the youth, or unskilled people that don’t have a high school degree, the number is closer to 30 percent. It’s a stressful situation.

The U.S. might not be Europe, but the U.S. is not used to having an unemployment rate so high — and staying so high. Usually, when you get a recession the monetary and fiscal stimulus leads to a recovery of jobs in short order. But this is becoming chronic and longer term. Either the United States becomes like Europe — and we’ve already extended unemployment benefits three or four times over — or otherwise you have a much bigger social welfare state and safety net. Or you’ll have people rioting in the streets. We have to do something either way. Either we’ll have a fiscal problem or a social problem. 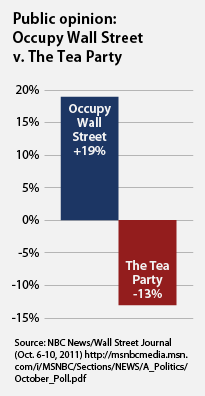 ThinkProgress reports: The new NBC/Wall Street Journal poll [PDF] shows that Americans support the Occupy Wall Street protests by a two-to-one margin (37 percent in favor, 18 percent opposed) while more Americans view the Tea Party negatively (28 percent in favor, 41 percent opposed). This means the Occupy Wall Street protests have a net favorability of +19 percent while the Tea Party has a net favorability of -13 percent, as this chart produced by ThinkProgress shows (right).

1 thought on “Roubini: Occupy Wall Street is a symptom of the economic malaise facing the world”