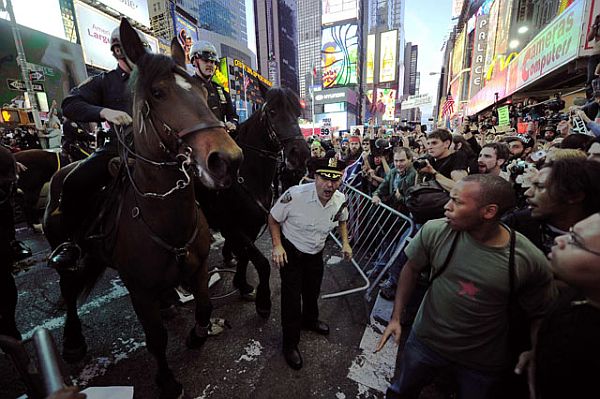 Jonathan Jones writes: A New York police officer leans forward and yells as if attempting, with the sheer force of his anger, to hold back time. His rage is understandable for, in this photograph, you can actually see the world turn upside down and all that was solid melt into air. This truly is a picture of a turning point in the history of the world.

It shows the moment when Occupy Wall Street campaigners reached Times Square, whose giant hoardings glow brightly in broad daylight even as furious protesters confront mounted police. When this photograph was taken, movements were simultaneously starting up around the world in emulation of Occupy Wall Street and its attempt to hold finance capitalists to account. In London and Vancouver, Brussels and – with a violent twist – in Rome, the call went out and the people came. But of all the weekend’s photographs of global protest against capitalist excess, this, surely, is the image that will endure.

That is because it captures the surrealism of a moment when the stabilities and certainties of an era suddenly became yesterday’s distant memory. Times Square makes a powerful setting for this picture. Shiny walls of towing glass, the citadels of corporate entertainment, dazzle among the giant screens – is that Apu from The Simpsons? – in the bright autumn air.

But no one is entertained. The faces in the crowd are genuinely angry and determined. A man in the foreground has a red star on his T-shirt. Sixty years ago they hunted reds in Times Square, metaphorically at least, as America fought the cold war. Today that red star says it all. These people have not come to protest just against a bad law or a single issue, but the system itself. They are putting capitalism in the dock. The photograph powerfully captures this moment because it so vividly shows the symbols of the order of things that inhabitants of western economies have up to now accepted.

There were “anti-capitalist” protests in the boom years but these were self-evidently marginal to a society lapping up the joys of credit. Today, the world is ready to listen to Occupy Wall Street and its claim to speak for the 99% against the profiteering 1%. Everyone knows what they are talking about and everyone can see some truth in it.