The Washington Post reports: Back in 2010, Richard Muller, a Berkeley physicist and self-proclaimed climate skeptic, decided to launch the Berkeley Earth Surface Temperature (BEST) project to review the temperature data that underpinned global-warming claims. Remember, this was not long after the Climategate affair had erupted, at a time when skeptics were griping that climatologists had based their claims on faulty temperature data.

Muller’s stated aims were simple. He and his team would scour and re-analyze the climate data, putting all their calculations and methods online. Skeptics cheered the effort. “I’m prepared to accept whatever result they produce, even if it proves my premise wrong,” wrote Anthony Watts, a blogger who has criticized the quality of the weather stations in the United Statse that provide temperature data. The Charles G. Koch Foundation even gave Muller’s project $150,000 — and the Koch brothers, recall, are hardly fans of mainstream climate science.

So what are the end results? Muller’s team appears to have confirmed the basic tenets of climate science. Back in March, Muller told the House Science and Technology Committee that, contrary to what he expected, the existing temperature data was “excellent.” He went on: “We see a global warming trend that is very similar to that previously reported by the other groups.” And, today, the BEST team has released a flurry of new papers that confirm that the planet is getting hotter. As the team’s two-page summary flatly concludes, “Global warming is real.”Here’s a chart comparing their findings with existing data: 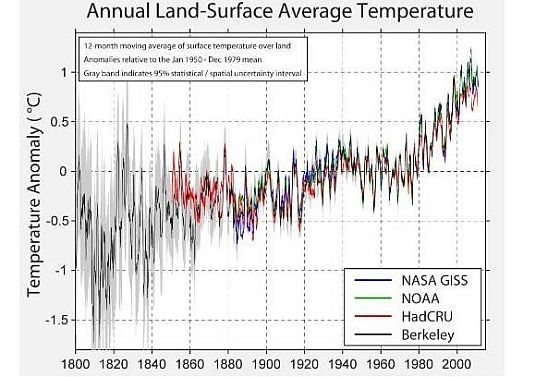 2 thoughts on “A skeptical physicist ends up confirming climate data”