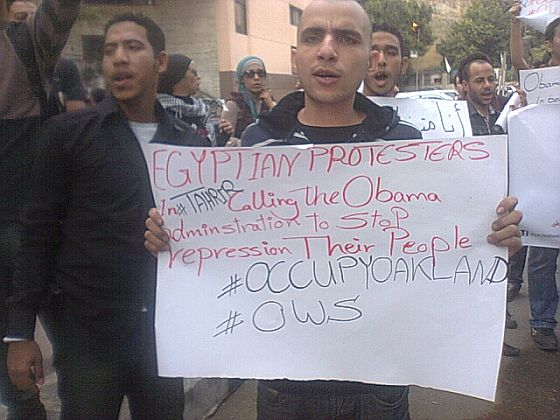 Xeni Jardin writes: As they vowed earlier this week to do, Egyptian pro-democracy protesters marched from Tahrir square to the U.S. Embassy today to march in support of Occupy Oakland—and against the type of police brutality witnessed in Oakland on Tuesday night, and commonly experienced in Egypt.

In this post, photos from Egyptian blogger Mohammed Maree, who is there at the march live-tweeting these snapshots. He is a journalist with Egytimes.org, a human rights activist, and a veterinarian; all photos are his. 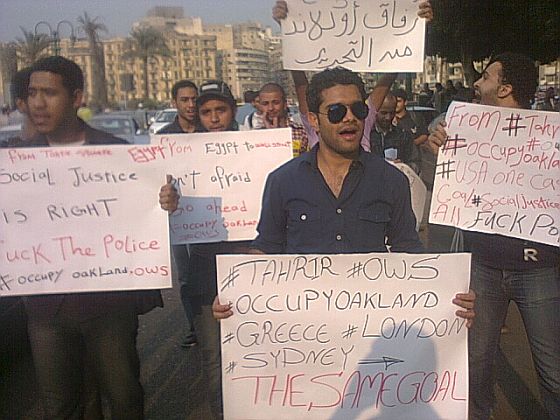 Meanwhile, the New York Times reports on questions being raised about the violent tactics used by police in Oakland where the weapons being used are the same as those used lethally by Israeli soldiers against non-violent Palestinian protesters in the West Bank and by Egyptian security services against non-violent Egyptian protesters in Tahrir Square.

Two days after an Iraq war veteran suffered a serious head wound at a protest in Oakland, Calif., questions are being asked about the way police officers tried to disperse Occupy Oakland protesters with tear gas and other “less-lethal” munitions.

The condition of the wounded veteran, Scott Olsen, was upgraded to fair from critical at Highland Hospital in Oakland on Thursday The San Francisco Chronicle reported. On Friday morning, Mr. Olsen’s roommate, Keith Shannon, who served with him in the Marines, told CNN that doctors expect him to make a full recovery, although he is still unable to speak and still has some trouble writing.

Oakland’s mayor, Jean Quan, visited Mr. Olsen in the hospital to apologize for his injuries and promised an investigation, a hospital spokesman told The Chronicle. The mayor also tried to address protesters near City Hall late Thursday night but was “greeted with cries of ‘Go home!’ and ‘Citizen’s Arrest,’” The Bay Citizen, a local news site, reported.

Another spokesman told reporters that Mr. Olsen “responded with a very large smile” to a visit from his parents on Thursday.

As The Lede reported on Wednesday, Mr. Olsen is a 24-year-old former Marine and a member of two veterans peace groups. He works at a San Francisco software firm.

Video uploaded to YouTube on Thursday appeared to show that Mr. Olsen was standing peacefully in front on police lines just before he was struck in the head. This edit of clips from various sources by a video blogger named Raleigh Latham shows Mr. Olsen standing still as projectiles were fired into the crowd of protesters on Tuesday night:

1 thought on “Egyptian protesters’ message to Obama: Stop repression of your own people”