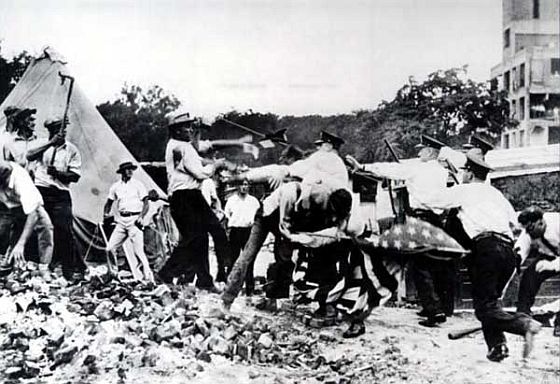 David Woolner writes: The violence that broke out in Oakland earlier this week and the wounding of Scott Olsen, a Marine veteran, recalls a similar “occupy movement” involving veterans that took place in Washington at the onset of the Great Depression.

In 1932, thousands of unemployed World War I veterans, desperate from lack of work, converged on Washington, mostly by riding the rails, in support of a bill that would have allowed them to receive immediate cash payment of the war service “bonus” they were due in 1945. The veterans called themselves the “Bonus Army” or “Bonus Expeditionary Force.” By the end of May of that year, more than 20,000 had occupied a series of abandoned buildings near the Washington Mall and a sprawling shantytown they built on the Anacostia Flats not far from the Capitol. On June 15, 1932, the House of Representatives passed a bill in favor of the veteran payments, but as both President Hoover and a majority in the Senate opposed it, the “Bonus bill” went down to defeat two days later.

In the wake of this defeat, roughly 15,000 members of the Bonus Army decided that they would continue their occupation as a protest against the government’s decision. By late July, President Hoover decided it was time to clear the city of the protesters, using four troops of cavalry under the command of General Douglas MacArthur. Late in the afternoon of July 28, General MacArthur’s troops — with sabers drawn — cleared the buildings near the Mall. They then fired tear gas among the men, women, and children encamped in Anacostia (many veterans were accompanied by their families); stormed the area on horseback, driving them out; and intentionally burned the shantytown to the ground in the process. More than 1,000 people were injured in the incident and two veterans and one child died.

In attacking the shantytown, MacArthur had exceeded his orders, which were simply to clear the buildings and surround the camp so as to contain it. But this meant little to the public, who were outraged at the treatment the veterans had received at the hands of the government and furious at Hoover for ordering the operation. Hoover, nevertheless, remained publically unrepentant and refused to apologize to the veterans — moves that contributed greatly to his massive loss to Franklin Roosevelt a few months later.