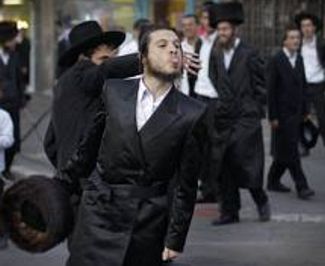 Haaretz reports: Ultra-Orthodox young men curse and spit at Christian clergymen in the streets of Jerusalem’s Old City as a matter of routine. In most cases the clergymen ignore the attacks, but sometimes they strike back. Last week the Jerusalem Magistrate’s Court quashed the indictment against an Armenian priesthood student who had punched the man who spat at him.

Johannes Martarsian was walking in the Old City in May 2008 when an young ultra-Orthodox Jew spat at him. Maratersian punched the spitter in the face, making him bleed, and was charged for assault. But Judge Dov Pollock, who unexpectedly annulled the indictment, wrote in his verdict that “putting the defendant on trial for a single blow at a man who spat at his face, after suffering the degradation of being spat on for years while walking around in his church robes is a fundamental contravention of the principles of justice and decency.”

“Needless to say, spitting toward the defendant when he was wearing the robe is a criminal offense,” the judge said.

In 2009, the Jerusalem Post reported: News stories about young Jewish bigots in the Old City spitting on Christian clergy – who make conspicuous targets in their long dark robes and crucifix symbols around their necks – surface in the media every few years or so. It’s natural, then, to conclude that such incidents are rare, but in fact they are habitual. Anti-Christian Orthodox Jews, overwhelmingly boys and young men, have been spitting with regularity on priests and nuns in the Old City for about 20 years, and the problem is only getting worse.

“My impression is that Christian clergymen are being spat at in the Old City virtually every day. This has been constantly increasing over the last decade,” said Daniel Rossing. An observant, kippa-wearing Jew, Rossing heads the Jerusalem Center for Jewish-Christian Relations and was liaison to Israel’s Christian communities for the Ministry of Religious Affairs in the ’70s and ’80s.

For Christian clergy in the Old City, being spat at by Jewish fanatics “is a part of life,” said the American Jewish Committee’s Rabbi David Rosen, Israel’s most prominent Jewish interfaith activist.

“I hate to say it, but we’ve grown accustomed to this. Jewish religious fanatics spitting at Christian priests and nuns has become a tradition,” said Roman Catholic Father Massimo Pazzini, sitting inside the Church of the Flagellation on the Via Dolorosa.

These are the very opposite of isolated incidents. Father Athanasius of the Christian Information Center called them a “phenomenon.” George Hintlian, the unofficial spokesman for the local Armenian community and former secretary of the Armenian Patriarchate, said it was “like a campaign.”

Christians in Israel are a small, weak community known for “turning the other cheek,” so these Jewish xenophobes feel free to spit on them; they don’t spit on Muslims in the Old City because they’re afraid to, the clerics noted.

In 2004, Eric J Greenberg, wrote in The Forward: It has been Jerusalem’s dirty little secret for decades: Orthodox yeshiva students and other Jewish residents vandalizing churches and spitting on Christian clergyman as they walk along the narrow, ancient stone streets of the Old City.

Now, however, following a highly publicized fracas last week between a yeshiva student and the archbishop of Jerusalem’s Armenian Church, the issue is generating unprecedented media attention in Israel. The fight started after a yeshiva student at the respected Har Hamor yeshiva spat on Archbishop Nourhan Manougian during a Christian holy procession in the Old City.

In the wake of the incident, a top Armenian Church official told the Forward that his church is calling on the Israeli government and on rabbis around the world to help put a stop to the offensive, decades-long abuse.

“These ultra-Orthodox Jews are the ones causing this scandal, those that live here in our neighborhood and the ones that come visit the Western Wall,” said the church official, Aris Shirvanian, in a phone interview Monday. He spoke from the patriarchate’s world headquarters in the Armenian Quarter, one of the famed four quarters of the Old City of Jerusalem.

“We would like to see the authorities… become more strict with the offenders,” said Shirvanian, director of ecumenical and foreign relations of the Armenian Patriarchate. “We would also ask rabbis to get involved in educating this one sector of the Jewish society.”

Har Hamor is one of the leading institutions of religious Zionism, Israel’s equivalent of Modern Orthodoxy. Most sources interviewed for this article suggested that the abusive practices were more common in the ultra-Orthodox or Haredi community, which is characterized by greater insularity… But sources told the Forward that the practice has recently been picked up by other segments of the Orthodox world, including visiting American yeshiva students.

The controversy comes as the Israeli government and Diaspora Jewish organizations have been attempting to focus international attention on what they describe as a surge in antisemitism across the globe. Beyond potentially undermining these efforts, the reports of anti-Christian harassment could weaken Israel’s claim to be an effective guardian of Christian and Muslim rights in Jerusalem.

“Protection of everything sacred to other religions is one of the justifications for Israel’s sovereignty in Jerusalem, whose legitimacy will be undermined if this spitting becomes prevalent,” said a former Israeli chief rabbi, Israel Meir Lau. Lau condemned the harassment, and warned that such incidents could fuel antisemitism outside of Israel.

Besides the Armenian rite, clergy of other Christian churches have been targeted, Shirvanian said. “This is not happening only to Armenian clergy, but also to the Catholics, Syrians, Romanians and Greek Orthodox.”

Interior Minister Avraham Poraz called the yeshiva students’ behavior “intolerable,” and asked Internal Security Minister Gideon Ezra to “take all the necessary steps to prevent these incidents in the future.”

At the end of 2009, Beth Din Tzedek, the tribunal justice of the Orthodox Jewish community in Jerusalem, issued the following statement:

Recently, repeated complaints have been made by gentiles regarding recurring harassment and insults directed at them by irresponsible youths in various places in the city, especially in the vicinity of Shivtei Yisrael Street and adjacent to the grave of Shimon the Just.

Besides desecrating the Holy Name, which in itself represents a very grave sin, provoking gentiles, according to our sages — blessed be their holy and righteous memory — is forbidden and is liable to bring tragic consequences upon our own community, may God have mercy.

We hereby call upon anyone who has the power to end these shameful incidents through persuasion, to take action as soon as possible to remove these hazard, so that our community may live in peace.

The tribunal in issuing this appeal apparently did not see itself as possessing the power to reign in its own community. Neither did it see fit to offer an apology to Jerusalem’s Christians. It’s primary concern was what kind of backlash the behavior of its own youth might eventually provoke.

The robed Christian clergy are not the only gentiles who have been subjected to spitting attacks. A year ago, Anne Barker, Middle East correspondent for Australia’s ABC News, described the humiliation and degradation she experienced when a mob of angry Orthodox men spat on her while she was reporting on street protests in Jerusalem.

I was aware that earlier protests had erupted into violence on previous weekends — Orthodox Jews throwing rocks at police, or setting rubbish bins alight, even throwing dirty nappies or rotting rubbish at anyone they perceive to be desecrating the Shabbat.

But I never expected their anger would be directed at me.

They might be supremely religious, but their behaviour — to me — was far from charitable or benevolent.

I found myself herded against a brick wall as they kept on spitting — on my face, my hair, my clothes, my arms.

It was like rain, coming at me from all directions — hitting my recorder, my bag, my shoes, even my glasses.

Somewhere behind me — I didn’t see him — a man on a stairway either kicked me in the head or knocked something heavy against me.