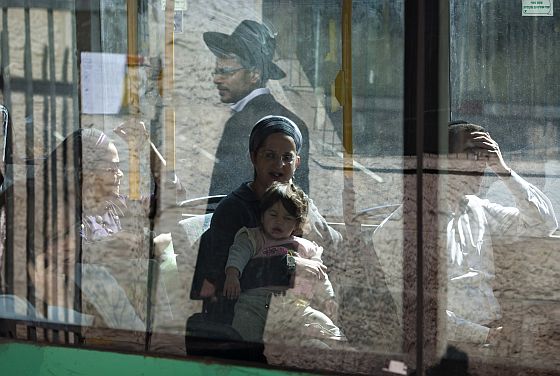 Women required to sit out of men's sight, at the back of the bus.

The Associated Press reports: Posters depicting women have become rare in the streets of Israel’s capital. In some areas women have been shunted onto separate sidewalks, and buses and health clinics have been gender-segregated. The military has considered reassigning some female combat soldiers because religious men don’t want to serve with them.

This is the new reality in parts of 21st-century Israel, where ultra-Orthodox rabbis are trying to contain the encroachment of secular values on their cloistered society through a fierce backlash against the mixing of the sexes in public.

On the surface, Israel’s gender equality bona fides seem strong, with the late Golda Meir as a former prime minister, Tzipi Livni as the current opposition leader, and its women soldiers famed around the world.

Reality is not so shiny. The World Economic Forum recently released an unfavorable image of women’s earning power in Israel, and in 2009, the last year for which data are available, Israeli women earned two-thirds what men did.

The newly enforced separation is felt most strongly in Jerusalem, where ultra-Orthodox Jews are growing in numbers and strength. The phenomenon is starting to be seen elsewhere, though in the Tel Aviv region, Israel’s largest metropolis, secular Jews are the vast majority, and life there resembles most Western cities.

Still, secular Jews there and elsewhere in Israel worry that their lifestyles could be targeted, too, because the ultra-Orthodox population, while still relatively small, is growing significantly. Their high birthrate of about seven children per family is forecast to send their proportion of the population, now estimated at 9 percent, to 15 percent by 2025.

1 thought on “Gender apartheid on the rise in Israel”