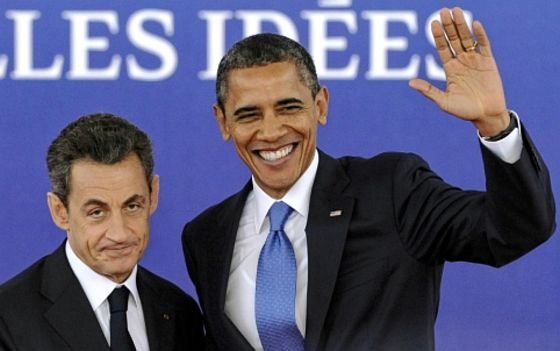 “Who the fuck does he think he is? Who’s the fucking superpower here?” Bill Clinton said in exasperation about Benjamin Netanyahu after one of the Israeli prime minister’s characteristic displays of arrogance in 1996.

Now we learn that last Thursday at the G20 summit in Cannes, France’s President Nicolas Sarkozy privately described Netanyahu as a “liar” and said “I cannot stand him,” to which President Obama gave the fairly tepid response: “You’re fed up with him, but I have to deal with him every day!”

The exchange was picked up on an open microphone but the press in Cannes who overheard the presidential tête-à-tête agreed that it was too sensitive to report.

Are these journalists or presidential courtiers?

A member of the media confirmed Monday that “there were discussions between journalists and they agreed not to publish the comments due to the sensitivity of the issue.”

He added that while it was annoying to have to refrain from publishing the information, the journalists are subject to precise rules of conduct.

Like when they are supposed to curtsy, make full bows, or discreetly look the other way?

Even now, now that the Sarkozy-Obama indiscretion has leaked out, there are several variations of translation of what Obama said.

So even though the press has broken its four day silence, instead of reporting the exact wording — words surely spoken in English — the press is merely repeating what has been reported on the French website — and even though the contents of that report have been confirmed by Reuters.

Watch out for the word sensitivity in any news report. Chances are, what it really refers to is complicity.