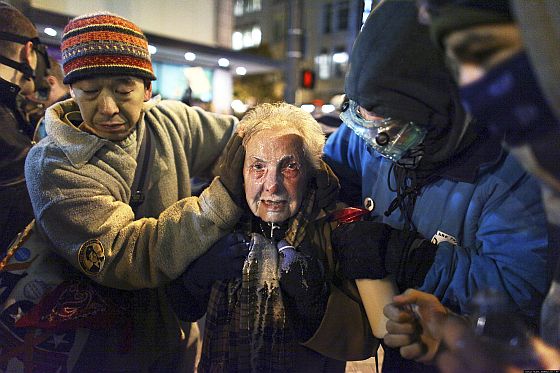 Occupy activist Dorli Rainey, 84, after being hit with pepper spray during a protest in Seattle. Photograph: Joshua Trujillo - AP

Jonathan Jones writes: Every nascent political movement needs martyrs. Even the sensible British labour movement, whose history is mostly peaceful and overwhelmingly parliamentary, has its memories of the Tolpuddle Martyrs and the Peterloo massacre. Revolutionary traditions fervently venerate their political saints: Irish republicanism has an especially rich pantheon from Pearse and Connolly to Bobby Sands. The Egyptian revolution, less than a year old, already has martyrs including the artist Ahmed Basiony who was shot dead by security forces on 28 January, and whose life and work have since been commemorated at the Venice Biennale.

This week the Seattle police provided the Occupy movement a powerful image of martyrdom. Dorli Rainey was not killed – let’s not overdo any analogies between economic protests in western democracies and the desperate struggle for freedom in Egypt or Syria. She was “only” pepper-sprayed. But she happens to be 84, and photographer Joshua Trujillo happened to be on hand to take a haunting photograph of her reddened eyes and shellshocked expression that subtly and strongly portrays Rainey as a modern martyr.

I am not suggesting this lightly. The martyrdom in Seattle conforms, in Trujillo’s photograph, to the deep religious roots of the idea of suffering for a cause. Rainey resembles a humiliated Christ in this picture. She is supported by two men, one on either side, who both lower their faces – one has his eyes closed in self-protection, the other wears defensive goggles – in what may be a sensible precaution to avoid getting sprayed themselves, but which also looks like a gesture of compassion, of quiet rage and dignified sorrow. It is at once a real moment – the men shielding their eyes while showing her hurt to the camera – and an image straight out of a Christian Renaissance painting.