Al-Masry Al-Youm reports: Presidential hopefuls Abdel Moneim Abouel Fotouh and Mohamed ElBaradei are speaking to Dream TV, a private satellite channel, criticizing both the Supreme Council of the Armed Forces (SCAF) and the government for mishandling the situation in Tahrir.

ElBaradei said the prime responsibility for the situation in the country is the SCAF, which he says has admitted it cannot run the country. ElBaradei asked who is responsible for starting this barbaric use of force that left over 1000 injured, 10 dead and 10 more blind; he answered: the Interior Ministry.

Abouel Fotouh said that, once again, protesters are being subjected to the same oppressive tactics used during the era of ex-president Hosni Mubarak. He added that until today, the blood of Egyptians is being shed only because the pure youth are trying to save their homeland. He said that the youth in Tahrir now are the same revolutionaries we all know.

Anjali Kamat, an independent journalist and correspondent for Democracy Now! posted a photo of “8 unmoving bodies” in Tahrir. There have been multiple reports of Egyptian security services firing live rounds during the protest. 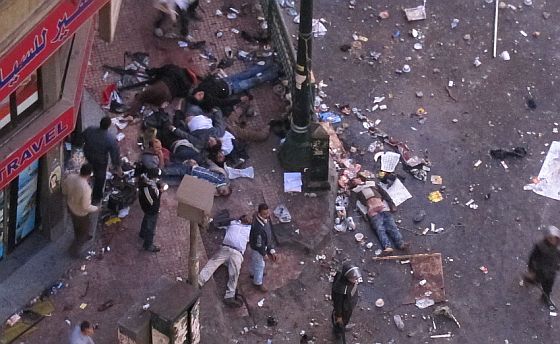 A podcast from The Arabist puts today and yesterday’s violence in context.