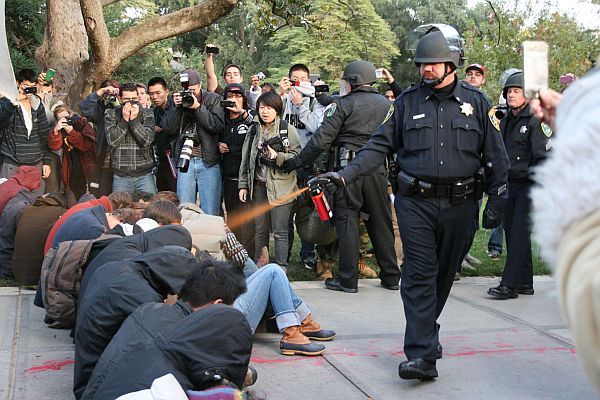 Megan Garber writes: This weekend, a series of photographs — images of a riot-gear-wearing cop shooting a group of students in the face with pepper spray — made their transition from journalistic documents to sources of outrage to, soon enough, Official Internet Meme. Perhaps the most iconic image (taken by UC Davis student Brian Nguyen, and shown above) isn’t explicitly political; instead, it captures a moment of violence and resistance in almost allegoric dimensions: the solidarity of the students versus the singularity of the cop in question, Lt. Pike; their steely resolve versus his sauntering nonchalance; the panic of the observers, gathered chorus-like and open-mouthed at the edges of the frame. The human figures here are layered, classified, distant from each other: cops, protestors, observers, each occupying distinct spaces — physical, psychical, moral — within the image’s landscape.

As James Fallows put it, “You don’t have to idealize everything about them or the Occupy movement to recognize this as a moral drama that the protestors clearly won.”

Exactly. The image — and its subsequent meme-ification — marked the moment when the Occupy movement expanded its purview: It moved beyond its concern with economic justice to espouse, simply, justice. It became as much about inequality as a kind of Platonic concern as it is about income inequality as a practical one. It became, in other words, something more than a political movement.

The image itself, I think — as a singular artifact that took different shapes — contributed to that transition, in large part because the photo’s narrative is built into its imagery. It depicts not just a scene, but a story. It requires of viewers very little background knowledge; even more significantly, it requires of them very few political convictions, save for the blanket assumption that justice, somehow, means fairness. The human drama the photo lays bare — the powerless being exploited by the powerful — has a universality that makes its particularities (geographical location, political context) all but irrelevant.