CNN reports: Egypt’s general prosecutor on Friday ordered a police officer to submit to questioning regarding his suspected role in shooting protesters in the eyes during recent clashes in Cairo’s Tahrir Square.

“The Ministry of Interior is preoccupied by the latest events, but he will come in for questioning soon,” Adel Saeed, a spokesman for Egypt’s general prosecutor, said about the suspect, 1st Lt. Mahmoud Sobhi El Shinawi.

The evidence offered against El Shinawi includes videos recorded by protesters and posted on Facebook, Saeed said. At least five demonstrators have been shot in the eye, according to authorities. 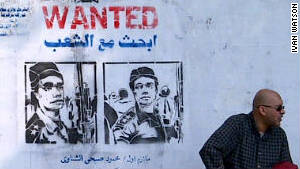 They are among hundreds of casualties over the past week. Some 41 people have died — 33 of them in Cairo — while an additional 3,250 had been wounded as of Friday, Health Ministry spokesman Hisham Shiha has said.

Protesters have called El Shinawi, specifically, “The Eye Hunter” and have sprayed “wanted” stencils featuring his face, name and rank on the walls around Tahrir Square.