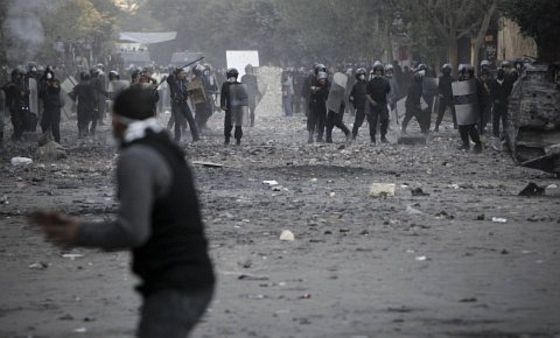 Al Jazeera reports: Not much is known about their organisation, but their presence is an accepted fact of Egyptian society. Most of them lack formal military training, or any training at all.

These are the Ultras, a group whose battle, usually reserved for the football stadium, has moved to the front line in the fight between anti-military protesters and government security forces in Egypt.

Often characterised as hooligans, the Ultras have been blamed for violence at football matches and are prone to clashes with police forces.

Even so, the membership in the group is a hard-won badge of honour for the young men gathered in Cairo’s Tahrir Square.

“It’s a way of life. You don’t just become one. You aren’t converted. You have to be an Ultra from within,” said Ahmed, a Cairo native and Ultra member who only agreed to an interview if his real name and appearance were not revealed.

The Ultras are notoriously media shy, even “anti-media”, according to Ahmed. He said they prefer to keep their identities secret, presumably to avoid unwanted police attention.

Ahmed is perched on the edge of a low stone wall, just to the south of Tahrir Square.

He and his fellow Ultras have pitched a number of tents there for their prolonged sit-in, along with thousands of other protesters demanding an end to military rule in the country.

Like many of the tents in the area, the Ultras’ lodgings are reinforced against the biting November wind with layers of blankets.

Their camp is set apart, however, by hastily sketched graffiti on the tents that proclaims their beliefs for those who know the code.

“A-C-A-B,” Ahmed said, reading aloud the red etchings on the outside of his tent. “All cops are bastards,” he explained.

According to Ahmed, the abbreviation is a motto for Ultras clubs around the world.

The phrase has particular meaning in Egypt, a country in which the police force is viewed with distrust and even outright loathing.

“Police are paid every month to serve us and help us and protect us, not to oppress us,” he said.

“I’m supposed to know when I go to a cop about a threat or harassment that I will get help, but that never used to happen. They should know they are here to serve us.”

It is sentiments such as this that brought hundreds of Ultras to central Cairo on November 19, the day Egyptian riot police entered Tahrir to forcibly disperse a sit-in by relatives of victims killed during the country’s January uprising.