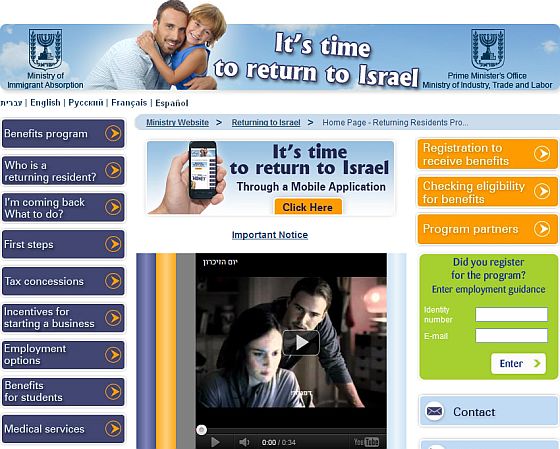 Screenshot of the website for an Israeli government campaign encouraging expatriate Israelis to leave the US and return home.

American Jewish leaders sent a blunt message to Israel’s leaders this week: don’t bite the hand that feeds you.

Well, maybe it wasn’t quite that blunt, but it didn’t need to be since it’s well understood that an insult to the American Jewish community risks damaging ties between the United States to Israel — ties that ensure the continuation of vital military and financial support for the Jewish state.

Is this the week that Israel, the longest running Jewish American TV show, “jumped the shark”? I wonder. Ruth Marcus getting vexed in the Washington Post that restrictions on women in Israel are a “national security” threat because they will alienate American Jews, on whom the country depends. Abe Foxman complaining about threats to civil liberties in the Knesset for the same reason. And now that stupid ad campaign warning Israelis in the U.S. not to marry Americans, but come back home. It disturbed Jeffrey Goldberg among others. Again because it makes their job, propagandizing, impossible.

The Netanyahu government has now cancelled the ad campaign, in embarrassment. The Washington Post rubs it in: “The Israeli government has canceled an ad campaign in which it suggested that Israeli expatriates will ‘lose their national identities’ if they marry Jewish Americans or celebrate Christmas. ”

Goldberg got the scoop, from Israeli ambassador Michael Oren, who said, “The Ministry of Immigrant Absorption’s campaign clearly did not take into account American Jewish sensibilities, and we regret any offense it caused.”

The funny thing is, even after this high level damage control, the Israeli ministry has only managed to remove one of the offending videos. Maybe the people running the campaign are still not sure what all the fuss is about. As the New York Times reports:

Some Israeli officials were mystified by the belatedness of the reaction; the campaign is a few months old. Attention increased after an item on it appeared on the Jewish Channel, a cable station, and a blog was posted this week by Jeffrey Goldberg, a writer for The Atlantic.

“The idea, communicated in these ads, that America is no place for a proper Jew, and that a Jew who is concerned about the Jewish future should live in Israel, is archaic, and also chutzpadik, if you don’t mind me resorting to the vernacular,” Mr. Goldberg said.

“The message is: Dear American Jews, thank you for lobbying for American defense aid (and what a great show you put on at the Aipac convention every year!) but, please, stay away from our sons and daughters.” Aipac stands for the American Israel Public Affairs Committee, a powerful lobby group.

On Thursday, the Jewish Federations of North America issued a memo that said: “While we recognize the motivations behind the ad campaign, we are strongly opposed to the messaging that American Jews do not understand Israel. We share the concerns many of you have expressed that this outrageous and insulting message could harm the Israel-Diaspora relationship.”

Steven Bayme, director of contemporary Jewish life at the American Jewish Committee, said that the campaign’s skepticism of Jewish life in the United States contributed to the angry reaction, particularly the message that Israelis should not marry American Jews. “We’re talking about one Jewish people, and certainly encouraging marriage within the Jewish people is something everyone would sign on to,” he said.

And who would be the “everyone” Bayme refers to?

Surveys of American Jews over the last four decades indicate that intermarriage (Jews marrying non-Jews) has steadily increased, rising from 13 percent before 1970 to about 50 percent or more currently. (The most recent National Jewish Population Survey was for 2000-01 [PDF] which measured the rate at 47 percent. It seems reasonable to assume that during the last decade the level of intermarriage has continued to increase.)

So, unless those American Jews who choose to marry non-Jews think that other Jews should be discouraged from following their example, it seems like the “everyone” Bayme is speaking for is probably just him and his fellow Jewish leaders.

Beyond this discord between Israel and the American Jewish community, there is another constituency that has reason to be insulted: the rest of us.

The Jewish need to defend the tribe seems like a given. If Jews don’t give birth to more Jews, then before long there will be no Jewish people. But take away the term “Jew” and what are we talking about here? What’s the difference between this notion of ethnic purity and perpetuation and any other?

In the mid-90s, America’s most prominent Jewish leaders issued a statement calling on American Jews to place five values at the heart of “Jewish continuity” efforts. The fourth of these is brith, which means covenant.

From the time of Abraham, Jews have seen themselves as bound to one another and to God through a covenant that distinguishes Jews from members of other peoples or faiths. This covenant serves to differentiate Jews from non-Jews and to ensure that Jews remain a people apart. American Jews, integrated into American society and full participants in its activities, are increasingly not a people apart. As boundaries blur, inclusivity runs the risk of degenerating into a vague universalism that is Jewishly incoherent; for example, non-Jews receiving aliyot. No matter how close the personal relationships between Jews and members of other faiths, Jewish continuity demands that strong, visible religious boundaries between Jews and non-Jews be maintained. Leadership roles within the Jewish community and in Jewish religious life must be reserved for those who accept the covenant — Jews alone.

America’s libertarian spirit embraces the idea that social isolation is a legitimate dimension of personal liberty. The Amish, for instance, are living the American way of life just as much as anyone else.

But just as isolation is a legitimate choice, it also incurs an inevitable price. Those who set themselves apart cannot so easily be embraced, indeed they signal that they do not want to be embraced.

Moreover, those who convey to society at large the message that they see its diversity as threat, should not be surprised if having set themselves apart, they become further isolated by being ostracized.

If most American Jews do not want to be a people apart, then it seems like it’s time Judaism came to terms with this reality. We live in a world that is too small for any tribe to put itself first or strive to set itself apart.