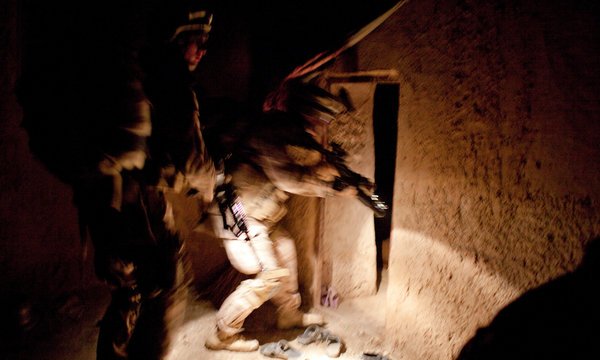 U.S. and Afghan government officials are struggling to reach a strategic long-term agreement — the sticking point is Afghan opposition to night raids which have surged under the Obama administration and now happen as often as 40 times a night.

NATO officials say they have modified how night raids are conducted in response to the Afghan government’s concerns.

“Ninety-five percent of all night operations at this stage are already partnered,” said Brig. Gen. Carsten Jacobson, the NATO spokesman in Afghanistan. “So basically the recommendation of the traditional loya jirga is already put into action.”

“It is in our combined interest that as soon as possible, Afghanization is accomplished,” he added, referring to an Afghan takeover of security responsibility.

Mr. Faizi was unimpressed by that argument. “According to reports from our officials in different provinces, the Afghan security forces are leaving with the American forces to go conduct night operations without being informed directly where they are going, which house they are searching and who is the target,” he said.

While General Jacobson said night raids averaged 10 a night now, a recent study of night raids by the Open Society Foundations, financed by George Soros, estimated that 19 a night were taking place during the first three months of 2011.

The American military is so enamored of the tactic that some generals have said that without night raids, the United States may as well go home.

General Jacobson said that 85 percent of night raids took place without a single shot fired, and that over all such operations accounted for less than one percent of all civilian casualties.

Statistics might calm the doubts of feeble-minded U.S. senators, but they will have little to no impact on the perceptions of Afghans whose homes are being violated. To live in a country where there is an ever-present risk of foreign soldiers breaking into your house in the middle of the night is to live in a state of oppression. This is the nature of occupation.

[Aimal Faizi, the spokesman for President Hamid Karzai,] said the raids were the biggest complaints that Mr. Karzai heard when visitors from the provinces met with him.

“If one of the messages of the United States is to win the hearts and minds of the Afghan people, then these night raids are totally against this,” he said. “People are becoming more and more against the international presence in Afghanistan.”

On the frontlines of southern Helmand Province, the governor of Sangin district, Mohammad Sharif, is a critic of the practice, even though his district has been the center of some of the toughest fighting of the war, with among the highest casualty rates for NATO forces. He said the Special Operations forces that carried out the raids often got the wrong people, including many pro-government people. “People are not happy, and they feel bad toward Americans,” he said.

A high-ranking official in Helmand Province saw the matter differently, although he did not want to be quoted by name endorsing night raids because of their unpopularity. “So many Taliban commanders have been killed or detained in night raids, and if it wasn’t for them, we would not have the peace we now have,” he said. “Taliban commanders are like snakes: it’s hard to catch them, and night raids are their charmers.”

He also noted that trying to arrest a Taliban commander during the day would inevitably mean a battle, which might well cause casualties among bystanders.

Mr. Faizi said the president was concerned that in many cases, Afghan families were forced to give food and shelter to insurgents, and then later were blamed for doing so and arrested. “We think that all these night raids, they bring the conflict directly to the homes of the Afghan people,” he said. “It has to be the opposite, the fight has to be fought somewhere else.”

2 thoughts on “Why Afghans have come to hate Americans”