After it became known a few days ago that Iran had captured a CIA RQ-170 surveillance drone, this was the assessment of one of Washington’s most frequently quoted defense technology experts: 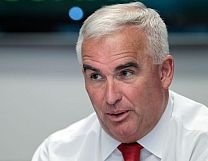 “[W]hat the Iranians have is a pile of wreckage — many small and damaged pieces from which they could glean little in the way of technological insights,” said Loren Thompson, defense policy analyst for the Lexington Institute in Arlington, Virginia, earlier this week.

Even now that Iran has released video of the captured drone, the Los Angeles Times isn’t ready to assert that it’s the real thing. “Iran shows off alleged captured U.S. drone,” (my emphasis) says their headline.

Alleged? I think it’s already fair to assume that this is the real thing — and we’re getting a much closer view of it than the CIA ever wished.

U.S. officials (and journalists dutifully repeating what they have been told) have insisted that this unmanned aircraft “crashed”.

All I can say is this: however this thing came down it had a pretty soft landing. It doesn’t look like it was shot down — as Iran originally claimed. But neither does it look like it completely lost control.

Did it gently glide down onto the perfectly smooth surface of a conveniently located dry salt lake? Maybe. Or — even though all the experts insist this is highly improbable — did the Iranians somehow manage to conduct a remote hijacking?